Maestra's Post is located in western Ashenvale, south of the Ruins of Ordil'Aran and northwest of Astranaar. It was once a small camp consisting of a tower and a large night elven building with only a few inhabitants, including Ashenvale's only population of humans - Feero Ironhand and Delgren the Purifier at that time. However, the forces of the Horde have since invaded, and it is now a major battleground.

As a result of renewed tension between the Alliance and Horde, Maestra's Post's has recently come under assault by Horde forces under the command of Orux Thrice-Damned and Feero and Delgren have been kidnapped. The Alliance forces are stretched thin, however, as they attempt to deal with both the corruption of the nearby furbolgs and the Horde forces. They will solicit help from willing adventurers.

During the Fourth War, the post was a battlefield.[1] 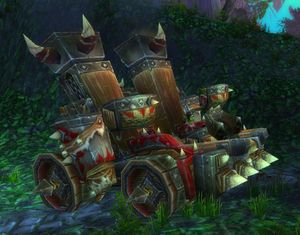 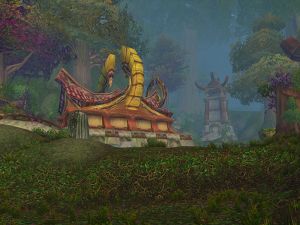 Prior to World of Warcraft: Cataclysm and the massive changes to 1-60 leveling areas, the post's namesake, Moon Priestess Maestra, had never been seen. (This is similar to the situation at Morgan's Vigil, whose namesake was also added in Cataclysm.) Due to the low level of the NPCs, Horde players used to come here to spawncamp Feero Ironhand and the other two NPCs.

In the post-Shattering version of Maestra's Post, the considerable Horde presence is merely meant as a quest objective for Alliance players, as Sentinel Onaeya will send players in with a contingent of sentinels.