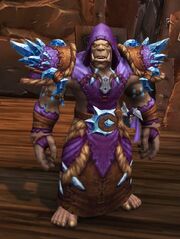 They are using the Void to maintain the portal.

Mag'har Darkcasters are Mag'har orcs who first appeared in Gorgrond. After the Mag'har were teleported from Draenor to Azeroth, they emerged in Durotar. Subsequently, they are present in the Hall of the Brave, the Valley of Honor, and the Orgrimmar Embassy in Orgrimmar. Two are holding a portal to Warspear in Pathfinder's Den.

During the battle at the Gates of Orgrimmar, Mag'har Darkcasters joined Overlord Geya'rah in the Valley of Strength, preparing for the upcoming assault.

Should you bring corruption here, your life will be forfeit.

Nor on your world, outsider!