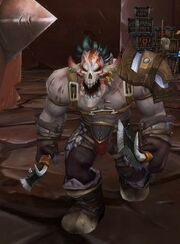 Mag'har Limbflayers are Mag'har orcs who first appeared in Gorgrond. After the Mag'har were teleported from Draenor to Azeroth, they emerged in Durotar. Subsequently, they are present in the Hall of the Brave, Valley of Honor, and Orgrimmar Embassy in Orgrimmar.

During the battle at the Gates of Orgrimmar, Mag'har Limbflayers joined Overlord Geya'rah in the Valley of Strength, preparing for the upcoming assault.

I am sorry. Did you have a question?

<The orc leans in close and whispers.>
I know exactly how to begin. Are you here for a demonstration?

On another matter... If you had to choose a limb you could live without, which would it be?