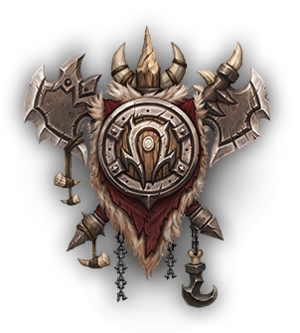 The Mag'har orcs are an allied race affiliated with the Horde. After the events of Hellfire Citadel on the alternate Draenor, the remnants of the Iron Horde and the Frostwolf clan united into one clan simply known as the "Mag'har", meaning "uncorrupted" in Orcish. During the Blood War, the Horde opened a portal back to the alternate Draenor, only this time many years later from their point of view, to recruit them in the conflict against the Alliance. After saving their kin from the Lightbound, the Mag'har were stranded on Azeroth as the portal closed behind, and agreed to join the Horde.