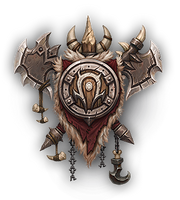 Mag'har orcs can be unlocked by Horde players who gain exalted with the Honorbound and complete the achievement     [Ready for War].