Magatha Grimtotem is the elder crone and matriarch of the once-mighty Grimtotem tribe. A powerful shaman and cunning leader, Magatha was the chief rival to High Chieftain Cairne Bloodhoof for the leadership of all tauren. When she found she could not remove Cairne politically, Magatha turned to treachery.[2] After engineering Cairne's death and briefly taking control of Thunder Bluff, Magatha and her Grimtotem were defeated by an army raised by Cairne's son Baine, and Magatha was exiled (along with any who chose to remain with her) by the new High Chieftain. 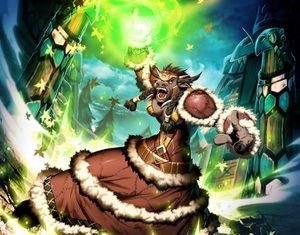 Magatha in the TCG.

Blessed with shamanic powers when she was just a young girl, Magatha has sought power and prestige nearly all her life. She became the matriarch of the Grimtotem clan through an arranged marriage that many suspect she arranged herself, but subsequently lost her mate to an unforeseen climbing accident. Since her mate's death, Magatha has commanded the stern Grimtotem warriors. The Grimtotems believe that Magatha will lead them in eradicating the lesser races from Kalimdor and retaking the tauren ancestral holdings abroad. Magatha constantly sparred with Cairne Bloodhoof over the direction of the tauren future and feels that only she is fit to rule her people.[3]

For reasons known only to herself, Magatha gave more aid to the Forsaken than to other high-ranking tauren such as Cairne Bloodhoof or Hamuul Runetotem. This included arguing on their behalf when the idea of forming an alliance with them was first suggested. Ostensibly she's helped them and continues to work closely with them because she feels the tauren and their ways can help the Forsaken find a path back to being human.[4] Skeptics believed her motives to be much less altruistic, skeptics which also did not trust the Forsaken.[5]

Magatha tried to negotiate with the troggs of Ragefire Chasm, but was met with hostility.[6] She also sent Ravak Grimtotem to observe other races, especially the gnomes.[7]

It was implied in the quest

[28] Arikara that the serpent of vengeance sought revenge on the tauren people and she claimed it was after Cairne Bloodhoof and tasked adventurers with destroying it.

Rehgar Earthfury took his gladiatorial slaves, Broll Bearmantle and Lo'Gosh, to Thunder Bluff. When they arrived, Rehgar was approached by Magatha, who said she knew several young tauren who would be strong candidates for his battle training - including her granddaughter and several grandnephews. While Rehgar considered this proposal, Broll and Lo'Gosh went to bathe in the Pools of Vision. They were attacked by a large cave elemental Magatha had summoned, but Lo'Gosh defeated it and the pools helped him recall some of his lost memories. In an attempt to discredit Cairne (who had been hesitant to disturb the elemental without understanding what it wanted), Magatha cheered on "Rehgar's champions" for accomplishing "what the great Cairne could not".[8]

Some time later, Rehgar's gladiators escaped. Some Forsaken informed her that a human assassin will be arriving soon and he arrived right after the departure of the two. She told him to meet her later. For 100 gold, she showed the assassin through a vision of Lo'Gosh location, the Warsong Gulch, and how he there won a battle with the night elves.[9]

Magatha sent a young tauren shaman named Kova Broadhorn to find a reclusive orc seer Dhambeela who is a personal friend and ally of Magatha. Kova succeeded and Magatha reunited with Dhambeela during the Darkmoon Faire at the base of Thunder Bluff. It seems that Dhambeela knew about Magatha's plan of removing Cairne. Magatha then spoke to Kova who thanked her for realizing that there is nothing wrong with accepting a help.[10] 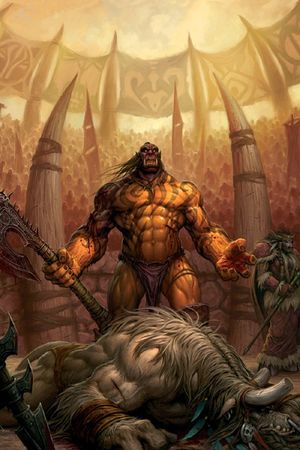 The Elder Crone watching in triumph as Cairne is slain by Garrosh.

Magatha, who became a matriarch of her tribe after her husband's accidental death, was present during a ceremony for Garrosh and his veterans from War against the Lich King.

Seeing Garrosh Hellscream as a potential means of disposing of Cairne, Magatha offers her support and that of the Grimtotem tribe to the new Warchief. When Cairne, displeased with Garrosh's leadership, challenges him to mak'gora, Magatha offers to be the shaman who blesses Garrosh's weapon, thus showing her opposition to Cairne openly. But rather than the ritual oils, Magatha applies poison to the blade of Gorehowl, merely applying drops of it to the axe head (not using her fingers to spread it around the blade, as was customary - a fact that Garrosh, largely ignorant of the dictates of mak'gora, did not notice). A glancing blow to Cairne paralyzes him, allowing Garrosh to kill him.

Cairne's body was not even cold before Magatha ordered her tribe to attack Thunder Bluff and other tauren towns, and kill everyone in them - including Cairne's son and heir, Baine. However, a Grimtotem shaman, known as Stormsong, warned Baine of his father's death and of the plan to assassinate him and aided him in rallying a force to take down Magatha and the Grimtotems. Magatha sent a request for assistance to Garrosh in Orgrimmar, believing that he would aid her as she had "aided" him; having discovered what had happened, Garrosh sent an insult-laden reply, condemning her treachery and refusing to aid her. The Grimtotem stood alone when Baine led his assault on Thunder Bluff, forcing Magatha to yield.

Crushing Magatha's totems, a grievous insult to the elements that she would have to atone for, Baine banished Magatha from the tauren lands on pain of death, and allowed those who would not follow her to remain in Thunder Bluff if they swore allegiance to him, under the leadership of Jevan Grimtotem, as their chieftain. Magatha and her loyalists, about three-quarters of the original tribe, were then taken to their place of exile in the Stonetalon Mountains.[11] 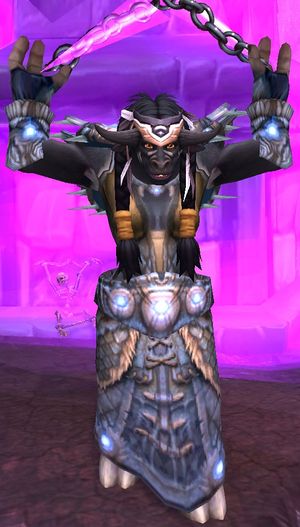 The Elder Crone in Thousand Needles.

Magatha's exile has not ended too well for the Elder Crone and her followers — Horde forces in the Stonetalon region have destroyed the Grimtotem's main camp, and the surviving Grimtotem have been forced to enter into an uneasy (and temporary) truce with the Alliance.

After making her way to the Grimtotem stronghold of Darkcloud Pinnacle, Magatha disappeared. She was a prize to the Twilight's Hammer, who took Magatha prisoner alongside many others in the region. Speaking through Arikara, she's able to rid her clan of incompetent leaders and gain powerful artifacts with the help of adventurers. However, the Twilight Cultists may have miscalculated in taking her prisoner, as she seems to have gained a great deal of understanding of their operations in Thousand Needles and even manages to manipulate others into not only opposing the Hammer, but in giving her access to several powerful artifacts in the process, including the Doomstone, a magical device capable of absorbing and amplifying elemental power. While the Twilights intended to use the Elemental Animus powered by the Doomstone to destroy all of Thousand Needles, it is as yet unknown what Magatha intends to do with the device, but she promised the next time she meets the adventurers, it would be their last encounter.[12] 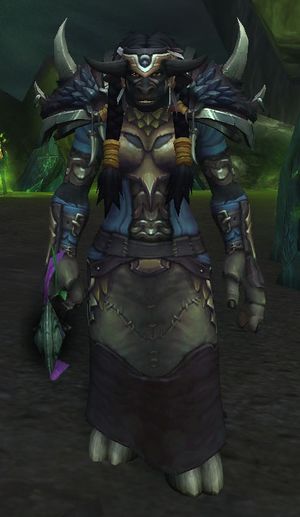 Magatha on the Broken Shore.

After the Legion invaded the Darkcloud Pinnacle and claimed both Arikara and the Doomstone, Magatha was forced to concede that she would need help. To that end she journeyed to the Maelstrom in order to get help from the Earthen Ring but, distrustful of her, the Earthen Ring barred her way in until the Farseer could decide her fate.[13] In a conversation with the Farseer she claims to be the leader that the tauren need, refusing to sit idly by like Baine Bloodhoof and the other tauren at Thunder Bluff "waiting for the Alliance and Legion to effortlessly roll over them."[14] Unwilling to allow the Doomstone to remain in Legion's hands the Farseer and Magatha depart to Thousand Needles, where they liberate her Grimtotem followers, rescue Arikara, and secure the Doomstone.

Upon awakening, the Farseer discovered that the Elemental Lords felt that the power of the Doomstone was too great to be used by mortal hands and yet felt that bringing into their own domain would upset the balance between the four realms. As such it was decided that the Doomstone would be safeguarded in the Maelstrom,[18] a decision that Magatha rejected on the grounds of the power contained within the Doomstone. She then joined with the Farseer and became a champion of the Earthen Ring and claimed that she and her Grimtotem will keep an eye on the Doomstone.[19]

During the Fourth War, Azeroth would suffer a grievous wound at the Maelstrom,[20] causing Azerite elementals to come forth in order to claim the newly formed Azerite. Oddly enough, despite her pledge to keep watch over the Doomstone, Magatha was nowhere to be found, and it was Nobundo who secured the Doomstone.[21]

Magatha Grimtotem is a level 113 (previously 88, 93 and 103) NPC in the Thousand Needles, where she offers the following quests:

Finding her is also the objective of

Originally, Magatha was a level 62 quest giver located on Elder Rise in the tauren city of Thunder Bluff. She was attended by her guards, Cor and Gorm Grimtotem, and by her servant, Rahauro. She offered the following quests:

Magatha’s the oldest living Grimtotem and the most powerful shaman of the tribe. She is an elderly tauren female with powerful shoulders and a white muzzle. She has not let age slow her down one bit, and she defends her position with every spark of magic at her command. She is forging ties with the Forsaken, and thinks they are the type to understand an unwavering hatred against all other races. It is rumored that she is planning on killing Bloodhoof, though she is not nearly strong enough to do so at this point.[22]

Greetings
What brings you to old Magatha?
Oh, what is it that you want, stranger? I have little time for foolishness!
Be careful what you search for, stranger.

I am Magatha Grimtotem, of the Grimtotem tribe. I am the Elder Crone, the matriarch of my tribe.

Though Baine may have exiled me from Thunder Bluff, I am the leader that the tauren need. They sit idly by in their tents, waiting for the Alliance and the Legion to effortlessly roll over them. My people and I refuse to let that happen to us. We do what we must to survive.

The Legion has attacked. The Grimtotem need me. Will you help, or will you get in the way?

It is speculated that she was the person named Agasham due to its anagram, Magasha, being similar to her name.

It's probable that she initially intended to use Arikara against Cairne Bloodhoof. When the Thousand Needles tauren discovered its whereabouts she had no other option than to play along and have it killed.