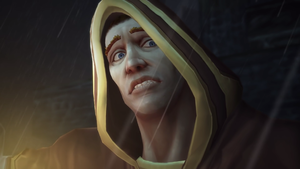 Darius as he appeared in the Patch 7.1.0 cinematic trailer.

Mage Darius is a level 68 reputation rewards vendor for the Violet Eye.

Darius, having been promoted from an apprentice to a mage, was killed by Moroes. During the Burning Legion's third invasion, Darius appears as a ghost.

He sells the following items:

Hello there! Did you notice that I have finally been granted the rank of mage? Posthumously, of course... but it is a great honor nonetheless.

With the promotion came a new charge: sprucing up the tower. It could stand to be a bit more inviting in case Archmage Khadgar has further need of it.

I wish to trade.

Apprentice Darius may be the one who wrote the Damaged Apprentice Journal, as the name "Darius Orion" is mentioned in the book.