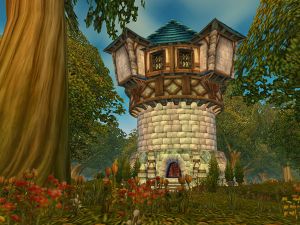 Tower of Azora in Elwynn Forest.

Mage towers are the mysterious places where the reclusive arcanists can work in privacy and store their valuable laboratories and libraries.

This was the mystic place where magiks were taught. These strange and mysterious workers of magic were a reclusive lot, and placed themselves above the law in many ways. They also demanded absolute secrecy and privacy for their studies, and so required their own domicile. Conjurers gathered at the Tower to practice and train in their arcane arts. When new magiks were learned, that knowledge was immediately sent by thought to other conjurers wherever they were in the realm. The recruiting of Conjurers was a common practice, but a price had to be paid in gold for their services, as few held duty to anyone. The massive energies used in their spells required that the Tower was constructed with long shafts of metal placed within the stone walls to act as a mystic lightning rod, for without these, the building would explode into a thousand pieces. A blacksmith had to be made available to create these devices to the exact specifications provided by the Conjurers.[1]

This was where the knowledge of the dark magiks were revealed. Warlocks resided here to focus their energies towards harnessing the forces of the underworld. Their sect demanded payment in precious metals for any services they offered, as it was then converted into the mystic symbols used in their castings. Metal cages in which to place the subjects of their experiments had to be constructed, as well as the ornate metal runes that needed to be built into the stone floors for their spells of summoning. Only the blacksmith could provide the needed materials and skills required to meet these exacting specifications.[2]

Serpentine spires of living rock formed the foundation of the mage towers where glowing spheres of mystic energy served to replenish and focus the awesome magiks wielded against the Orcish Horde. These towers held ominous secrets that none but the mages of Lordaeron dared to explore. As extensions of the Violet Citadel in Dalaran, these towers allowed the mages to research arcane spells, unfettered by the affairs of the temporal plane.[3]

Their function was replaced by the arcane sanctums. 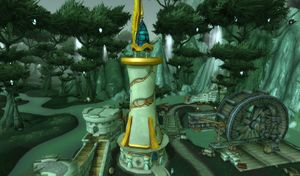 Human mage towers can be found all throughout Azeroth, Outland and Draenor. They have a different design than the ones used in the Second War, looking more like the guard towers of the Third War, except without the ballistae. Some towers are unique, reflecting the personalities of their builders.

Mage towers in the Great Sea