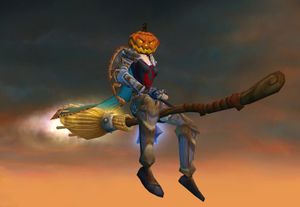 The Magic Broom is a temporary mount/item obtained from a quest, boss, or vendor during the Hallow's End seasonal event. It is instant cast and will adjust its speed and flight capability according to a character's riding skill, but can only be used during Hallow's End.

This item is an uncommon drop from the Headless Horseman encounter, which can be accessed through the Dungeon Finder during Hallow's End. It is also available for purchase from holiday vendors Dorothy and Chub, and can be found in Crudely Wrapped Gifts awarded daily for putting out the Horseman's fires in various towns.

This has several advantages compared to other mounts:

The item takes up a bag slot and is not placed in the player's Mount Collection. It is not shared with other characters on the account and is Bind on Pickup. It is removed from bags at the conclusion of the Hallow's End event.

It has an approximately 3 second cooldown, although this is only likely to be encountered when mounting, dismounting, and remounting in rapid succession.

Those items used to drop individually, but have been completely replaced by this one.