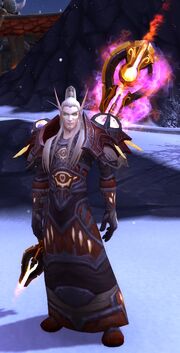 Magister Krelas is a Kirin Tor mage found at Khadgar's Tower. Horde players seeking to build an Arcane Sanctum will work with him, and he becomes a follower for their garrison after the questline is complete.

He is a proud fire mage. His counterpart, Magister Serena, is a passionate frost mage.

Krelas is a self-admitted pyromaniac, though he always manages to keep his cool in the heat of battle.[1] He is polite and formal in his disposition, and treats the player with the utmost respect from the moment he is first met.

This section contains information that needs to be cleaned up. Reason: Gossip? Where?

"My apologies for teleporting away. It's cheating, I know."

"It's time to fight fire with fire."

Why a Horde-leaning blood elf would remain part of the Kirin Tor after the Purge of Dalaran, or would even be allowed to, is unclear. He might have been separate from the Sunreavers and thus exempt from their exile.

Since Khadgar refers to him as a good friend it is possible he was allowed to the tower because of the Archmage himself, much in the same way that the player is allowed there - with Khadgar blatantly scoffing at Lady Jaina's ban of Horde in Zangarra.

He might simply be a high elf with no particular factional grudge, though he uses a blood elf voice and was even given green eyes (his eyes were blue throughout most of the beta), presumably to emphasize him being a blood elf.

This may also be a relic of when he was intended to be Conjurer Luminrath, a Kirin'var veteran. Luminrath was a long standing member of the Kirin Tor and a High Elf. This ultimately leads to another issue of why he would work for the Horde is unknown, though it is possible he could have sided primarily with his kindred in Silvermoon, made the transition to being a blood elf, or simply could have been aiding them as a favor to Khadgar.