Magisters' Terrace is a 5-man instance located on the northeastern corner of the Isle of Quel'Danas, which was released in patch 2.4.0. The instance includes outdoor walkways and courtyards, as well as indoor areas that use similar architecture as Silvermoon City. There is a Scrying Orb found on a balcony past the second boss that gives a sneak peek of the nearby Sunwell Plateau raid. Following this, players meet with Kalec, the half-elf avatar of the blue dragon Kalecgos. The final boss is none other than Kael'thas Sunstrider, who has survived his ordeal in Tempest Keep. He appears in both normal and heroic modes and drops epic level loot from both levels of difficulty.

Situated on a ridge in northeastern Quel'Danas, Magisters' Terrace serves as a convenient base for Kael'thas and his underlings as they assist the proceedings in the Sunwell Plateau. Kael'thas stands poised to desecrate the ancient lands of his people with an incomparable evil. Should he succeed, the Legion's darkness will rapidly spread to all corners of Azeroth, extinguishing everything in its path.[1]

Magisters' Terrace becomes the place where they hold the Trial of Style. Shadreen made a brief appearance here, collecting some information.

After his defeat in the Tempest Keep, Kael'thas Sunstrider publicly revealed his alliance with the ruthless Burning Legion. Intent upon summoning the demon lord Kil'jaeden, Kael'thas has returned to the Isle of Quel'Danas to make the final preparations for his master's arrival. 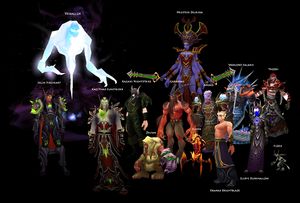 Most of the boss fights are the same as in normal mode. The Kael'thas fight is a little different in that he casts a Pyroblast one minute into the fight (won't cast it if he enters gravity lapse mode before that). During the cast time he puts up a shield (Shock Barrier, absorbs 10K damage) which makes him immune to all interrupts. The shield is vulnerable to normal attacks and MUST be taken down before the Pyroblast casts. Once the shield is down, normal spell interrupts (counterspell, shield bash, kick etc.) will stop the casting. If the Pyroblast is not interrupted it will deal upwards of 40,000 damage to the tank. Pally tanks can bubble out of the first pyroblast, and it is suggested that if dps isn't able to burn through the Shock Barrier that a warrior tank pop shield wall and last stand, it is possible that this might enable him to live through 1 pyroblast but should a 2nd come he has no recourse. If you fail to stop the Pyroblast and your tank goes down, you can still easily finish. For at this point there is no aggro, Kael just spams the gravity effect

For those solo farming Shattered Sun reputation or for the mount or pet drops, Magisters' Terrace is fairly easy at level 85, but not a total walk in the park. Carelessness can result in dying to the mob groups after

Vexallus, as they have an assortment of close-in and ranged abilities that can prove dangerous if not accounted for properly, depending on one's class. As for the bosses,

Vexallus are rather easy DPS races at this level, as is

Kael'thas Sunstrider (though unless one has exceptional DPS, he will cast his gravity lapse, which is little more than an annoyance). The

Priestess Delrissa encounter, however, does require a little planning, as the assortment of stuns available to her group (depending on which ones are present) can make this encounter a challenge for cloth-wearing characters if one is not careful. As for gold farming, the mobs usually drop between 50 silver and one gold each, though sometimes (considerably) less. With the gold from selling the drops off the bosses and mobs, one can usually realize between 100-200 gold for a full heroic run, minus repair costs.