Magistrate Barthilas is an elite wight mini-boss found in the Scourge side of Stratholme. 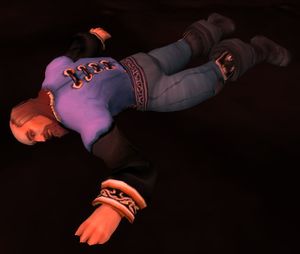 Upon death, Barthilas reverts back to this original human form

Barthilas was an ambitious young paladin who served under Tirion Fordring at Mardenholde Keep. He was ordained a paladin just as the Second War ended, a war which claimed his parents' lives, and left the young man a deep hatred for all orcs. When Tirion was found injured and unconscious, Barthilas immediately assumed that he had been attacked by an orc, and began to scour the countryside for a force of them. He called for help from Saidan Dathrohan. Barthilas, Tirion, Saidan and his men found the orc named Eitrigg and attempted to capture him. Tirion tried to defend Eitrigg but was arrested for treason.

After Tirion was arrested, Barthilas personally oversaw the paladin's prosecution and served as a witness during Tirion's trial. Barthilas also made plans for the torture and execution of Eitrigg only to see the orc escape from Stratholme with Tirion when Thrall attacked the city. During the raid, one of the orcs jabbed a spear into Barthilas's chest. Despite the grievous wound, Barthilas survived and eagerly assumed his new position as Lord of Mardenholde after Tirion went into exile. His title eventually passed to Tirion's son Taelan Fordring.

At some point after the events of Of Blood and Honor, having survived his impalement earlier on, Barthilas became Magistrate of Stratholme, where he remained until the time the Stratholme was purged by Prince Arthas. He then had an assistant called Patricia O'Reilly, and evidently fell during this period, becoming the creature seen in Stratholme today.

It appears canonical that he was killed by adventurers, as Baron Rivendare asks the death knight player if they would be interested in taking Barthilas's position as Stratholme's mayor.[1]

In the Culling of Stratholme, the new instance of the Caverns of Time, Barthilas is located in Stratholme's city hall, trying to assuage the fears of his petitioners, who are concerned over rumors of the plagued grain (the shipment from Andorhal tainted by Kel'Thuzad and the Cult of the Damned).

Barthilas was among those innocents purged by Arthas and his forces during the Culling of Stratholme. The Lich King eventually raised the former magistrate from the grave and commanded the hulking undead monstrosity to guard his ruined home.

The Magistrate could be found in two locations in Stratholme (Classic). If the party entered through the eastern gate (typically referred to as the back door, the dead side or Strat Baron side), the Magistrate sounds an alarm and runs from just inside the instance to the gates just before the Baron. If the party enters through the western gates (typically referred to as the front door, Strat Scarlet Side or the living side), he remains near the eastern entrance in front of Aurius.

See the map at Worldofwar.net for a layout of Stratholme. The location marked as 6 is where he is located when entering through the Scarlet Side gates. The location for the Baron side is unmarked, but it is between 10 and 12 (Maleki the Pallid and Ramstein the Gorger).

This was only important if you were trying to farm the Magistrate for drops. In particular, the druid idol (

[Idol of Brutality]) that drops from the Magistrate was excellent for bear druids and the quickest way to get to him would by entering through the Scarlet Side gates.

In Cataclysm, the Scarlet side and Scourge sides were separated, using the main entrance and the Eastwall Gate as their own entrances. Just as before, entering the Scourge side causes the Magistrate to sound an alarm and run from just inside the instance to the gates outside of Slaughter Square.

This fight is fairly straightforward, with one caveat. When tanking the Magistrate, it is best to have the tank back up against a wall, as this mob will punt the player with aggro a fairly good distance. In addition, if mobs were skipped near the gate, it is possible to be punted into them.

The punt effect is either a complete threat wipe or a large threat reduction that will hit the character currently tanking the Magistrate. It is important that dps run towards the tank rather than away from the tank if the Magistrate targets them following a punt. He is tauntable so it's easy to establish threat after the punt if the tank can reach him.