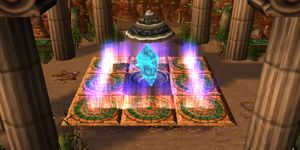 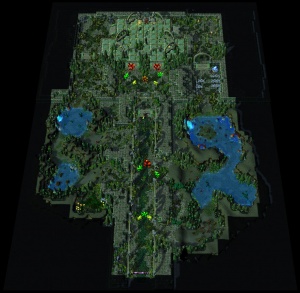 Magistrates Temple is a beacon of arcane power located somewhere in Dustwallow Marsh that wizards from across Azeroth have traveled to study within. Corrupted by their lust for power, they were hostile to all outsiders that did not share their thirst for magic, and it became overrun with makrura, sea turtles, hydras, spider crabs, Stormreaver and skeletal orcs as well as powerful demons apparently defending the Revenant of Burning Souls. Rexxar and his companions defeated the Temple's denizens and claimed its treasure for the Horde during the events of the Founding of Durotar. There was also a goblin black market.[1]

With the lure of arcane artifacts calling to them, wizards from across the world have ventured here to study and increase their power. Their magic is now their only concern, and any who do not share in their greed are considered intruders to be killed on sight.

The Magistrates Temple is likely of ancient Highborne night elf construction, considering its arcane power. There are definitive ancient night elf ruins as close as the Barrens and the Tomb of the Ancients is located nearby. The make and adornment of the Temple appear to share much with Suramar, the ancient capital of the night elves. Alternatively, the Temple could be of Titan origin, similar to the vault of Terramok in Desolace.

"Magistrates" may have been a grammatical mistake.