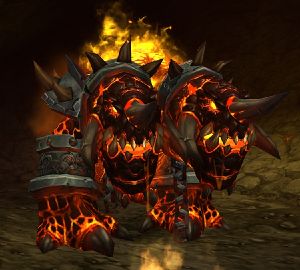 A terrifying behemoth composed of igneous rock and roiling magma, Magmadar serves as the origin of the core hounds that roam the earthen halls of Molten Core. Favored among Ragnaros's pets, Magmadar is protected by the flamewaker Lucifron and surrounded by vicious packs of ravenous hounds. It is said that while Ragnaros was imprisoned in the Elemental Plane, the Firelord would feed the remains of his captured enemies to the eagerly awaiting twin maws of Magmadar. As a result, the hound grew strong and loyal, and even now Magmadar's savage ferocity remains uncontested.[1] Magmadar is the alpha male of all core hounds.[2]

He lives within Magmadar Cavern guarding the Rune of Kress. He is found directly behind Lucifron.

The main tank should pull Magmadar so that he is facing towards the main group of healers, hunters, etc. Healers need to stand at max range behind the main tank. To find max range get to where you are too far away to heal the main tank and then slowly get closer until you are in range. If you are at max range you will be able to heal the tank, but too far away to be affected by the AOE fear. Priests should keep Fear Ward on the main tank. Hunters must use Tranquilizing Shot (a learned skill that comes from a tome with a 100% drop rate from Lucifron) when he frenzies, they must pay attention to the order they use it in and whether it is a hit or a miss. Melee DPS should come in on the sides and behind Magmadar. They need to be sure to avoid the Conflagrate and will be responsible for removing themselves from battle and bandaging since they will be out of range of the healers. If Fear Ward is not available, the warrior can "stance dance" in and out of berserker stance in order to use Berserker's Rage about every 30 seconds to avoid being feared. It is important that the main tank doesn't get feared — otherwise, while aggro will no longer be lost, Magmadar will follow the fleeing tank and the healers will suddenly be in range of him, and it is unlikely that the raid group will recover.

Magmadar also can be skinned for