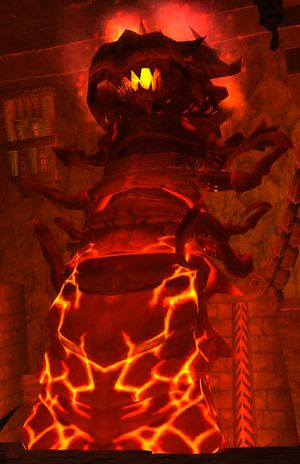 Magmaw is the first boss in Blackwing Descent, though he could be done second, after Omnotron Defense System.

Magmaw is a colossal lava worm summoned from the Firelands centuries ago by Ragnaros' Dark Iron servitors. Nefarian largely considered Magmaw a worrisome pest, but has grown fond of feeding the beast his failed experiments... and servants.

At all times keep the ranged & healers in one tight bunch, at distance from the boss

Designate two ranged/healer spots that will be used alternately as needed throughout P1. Far enough apart to give you room to deal with worms, but not needlessly far because of time lost running. 20ish yards apart should do it.

This phase is more about surviving and killing worms than anything else. You do not want to have worms alive in P2.

The tank will receive the armor debuff a after being freed, so a new tank is needed for the next P1.

This phase is about DPS for dpsers, and regenerating mana for healers.

It is possible to single-tank this fight, provided your healers are sufficiently geared and your tank knows what to do:

Magmaw uses everything from normal mode (and hurts more, of course), with the following additions:

You probably want to deal with all of this by putting the majority of the raid in melee range, and leaving a tank + a healer + maybe one more ranged dps out on the floor, so that they get targetted by Flame Pillar and the meteors. The tank spends the majority of his time kiting parasites.

The Constructs also need to be tanked. You can either use a fourth tank for this, or the currently-inactive (debuffed) tank, but of course that hurts a bit more.

There is also a final "burn phase" that starts at 30% health. Nefarian starts casting splash damage spells at the raid so you need to spread out to avoid instant death.

Intro
Nefarian yells: I found this fascinating specimen in the lava underneath this very room. Magmaw should provide an adequate challenge for your pathetic little band.

Blazing Inferno
Nefarian yells: On second thought, what fun is an "adequate" challenge?

Low health
Nefarian yells: Inconceivable! You may actually defeat my lava worm! Perhaps I can help... tip the scales.

Death on normal difficulty
Lord Victor Nefarius yells: Finally someone to deal with that unsightly pest! You have my thanks, "heroes."

Death on heroic difficulty
Nefarian yells: You won? How... disappointing. I could have easily watched you all continue to stand in the fire.