For the object of the same name, see Magnar Icebreaker (object).

Magnar Icebreaker was a legendary vrykul king who wielded the Blackwyrm Armaments, crafted from a scale of Neltharion himself, and led his people to countless victories. During the Battle of Suramar Pass, he and his son Hruthnir were betrayed and murdered by servants of Helya, and while Hruthnir was taken into the Halls of Valor by Odyn, Magnar's spirit languished alongside his body where it was buried in the Tomb of the Old Kings on Shield's Rest.

Magnar was among the countless vrykul who sought to prove themselves worthy to join the ranks of Keeper Odyn's Valarjar army when the keeper first created the Halls of Valor, but Magnar was perhaps the one who went to the greatest lengths. His victories in battle were beyond measure, and the strength of his deeds inspired others to seek their own heroic legacy. He was given the name "Icebreaker" by his comrades after his successful campaign against the nerubians in Northrend, where he discovered that cracks in glacier walls could be turned into tunnels that allowed him to dig deep into enemy strongholds and launch surprise assaults on them from within.[1]

During his travels across Azeroth, no creature enraptured Magnar so much as Neltharion, the Dragon Aspect of Earth and leader of the black dragonflight. Vrykul and dragons rarely interacted, but Magnar always watched in awe when Neltharion's flew overhead, and over time he began to wonder what wonders he could find in Neltharion's lair in Highmountain, located close to the vrykul home of Stormheim. His curiosity grew into an obsession, and he eventually convinced a vrykul raiding party to accompany him into the lair. They waited until they saw the Dragon Aspect leave his mountain, and then carefully crept inside, only to find that many of Neltharion's kin remained in the lair. A colossal battle erupted in the smaller side caverns beneath Highmountain, forcing Magnar to lead his party in a frantic run for an exit. Before they could escape, Neltharion returned to the mountain. Enraged at the trespassers, the dragon unleashed a single lethal breath of fire at the vrykul, who had nowhere to run or hide. In desperation, Magnar grabbed a piece of debris from the ground. The debris was actually one of Neltharion's cast off scales, and it saved Magnar's life as the blast of flame parted around it. The sheer force of the breath carried Magnar out of the lair, sending him tumbling down the slopes of Highmountain and leaving him badly wounded, but alive.[1]

It took years for Magnar to recover from his injuries, but in the meantime he examined the dragon scale he had acquired. He was awed by its resilience, for it had saved him from a fiery death without being so much as scratched or singed. Magnar wished to forge the scale into a lasting armament, but no vrykul blacksmith knew how to sculpt something so unusual. Thus, as Magnar recuperated, he began to study the art of blacksmithing himself. Few vrykul understood his motivations, as most sought entry into the Halls of Valor through glory on the battlefield, not by working a blacksmith's forge. Nevertheless, Magnar would become known as a respectable smith in his own right, and his blades were often sharper and more precise than those of his peers, for he knew that he would only have one opportunity to craft Neltharion's scale into a worthy shield. When the time came, he retreated to his forge and set to work. Days later, he emerged with two armaments unlike any the vrykul had ever seen: a shield of unimaginable endurance, and a sword polished to a fine edge. It was the last time Magnar crafted a weapon, for he would never need another.[1]

With the sword and shield in his hands, the already respected Magnar became a legend. Having learned from his disastrous venture into Neltharion's lair, he instead approached his campaigns with discipline and thoughtfulness, and the enemies of the vrykul stood little chance against him. Other vrykul flocked to his side with each victory he won, believing that they would all be ushered into the Halls of Valor by Magnar's feats. Only a few years after forging his new armaments, Magnar Icebreaker lead a sizeable portion of the vrykul people and had become a king.[1]

Magnar eventually set his sights on the region where he had earned his surname. In Northrend, remnants of the nerubian armies were once again emerging from their caves, seeking to seize Ulduar and the titan machinery within it. The king led his people against the nerubians, pushing them back to the entrance of Azjol-Nerub itself, defeating them so thoroughly that they ceased all aggression for millennia.[1]

During this time, the fallen val'kyr queen Helya, ruler of Helheim, took an interest in Magnar and began to wonder if his spirit would be strong enough to ascend into the Halls of Valor despite the fact that she had used her magic to seal away the Valarjar in the halls. After defeating the nerubians, Magnar focused his sights on the ancestral home of the vrykul: the city of Stormheim, at the time occupied by Highborne night elves. The vrykul believed that their path to a glorious afterlife with Odyn would be cleared if they once again held their ancestral home, and Helya and her followers knew that this was their best opportunity to strike at Magnar. With luck, the king's soul would be dragged down to Helheim rather than the Halls of Valor.[1]

Unware of Helya's plot, the vrykul launched a massive attack on Stormheim, surprising the Highborne with their ferocity. For weeks the elves and vrykul skirmished, with Magnar leading the charge, his shield protecting him from the Highborne's arcane magic. The vrykul's assault scored immediate victories and gave them enough momentum to push the Highborne out of the city entirely.[1] The elves' last chance to reclaim Stormheim happened at the Battle of Suramar Pass,[2] but in the end the vrykul stood victorious. The Highborne were forced to flee, and never made a claim upon Stormheim again.[1]

However, mere moments after Magnar's greatest triumph had been secured, traitors loyal to Helya arose within the vrykul's ranks to butcher Magnar's closest confidants, including his son, Hruthnir. Amid the chaos, more of Helya's Helarjar followers arrived to ensure Magnar's death. Upon seeing his son being killed, the king was consumed with rage and became a whirlwind of death, killing every enemy within reach and slaughtering countless kvaldir and traitorous vrykul before he was finally struck down. His people were able to rally and prevent the Helarjar from claiming Stormheim, but they were too late to save their king.[1]

Magnar's body was buried in the Tomb of the Old Kings, on the island of Shield's Rest northeast of Stormheim, but his spirit lingered in death. His rage stopped his soul from ascending into the Halls of Valor, but it also kept him from Helya's grasp. For thousands of years, he would remain between life and the afterlife, burning with fury.[1] 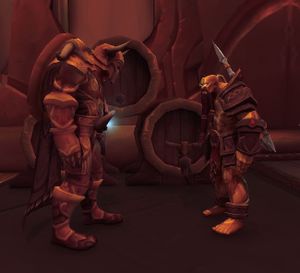 Magnar and Hruthnir in Skyhold.

Several millennia later, Odyn sent his new champion, a mortal warrior adventurer, to Shield's Rest along with Hruthnir, now a member of the Valarjar, both to retrieve the Blackwyrm Armaments and to bring Magnar's spirit to the Halls of Valor. After fighting their way through a group of undead and a minor Burning Legion incursion led by Pillik, Hruthnir and the adventurer entered the Tomb of the Old Kings to find that Magnar's ghostly servants were hostile to them and did not recognize their king's son, causing Hruthnir to comment that they were "infected" by his father's madness. In the Tomb of the Icebreaker, Hruthnir and the champion found Magnar, still raging at Helya and her "cowardly followers". Initially, Magnar did not recognize his son, but after a long battle Hruthnir managed to convince his father to come with him to the Halls of Valor. Magnar granted his shield and sword to the adventurer before going with his son to become a Valarjar.[3]

He can be found in the Great Mead Hall alongside his son following this, donning golden armor.

Main article: Legacy of the Icebreaker#Notes