The Magram clan of centaur have made their home in the southeastern parts of Desolace. They are mortal enemies of the Gelkis clan of centaur, a brother tribe also located in southern Desolace. The founding leader, or Khan, of the Magram was Magra, third of the alleged offspring of Zaetar and Theradras. The Magram were once willing to befriend adventurers of the Horde and Alliance in exchange for doing evil acts towards the Gelkis clan, while under Khan Jehn's leadership. Khan Kammah now leads the clan.

The Magram held no alliance with their brother tribes, until some time after having lost their lands to the demons. 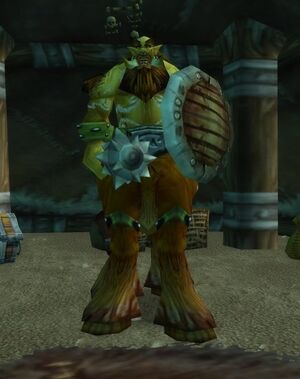 Originally led by the Third Khan Magra, the Magram situated themselves against the mountain ranges of Desolace when the centaur divided into five tribes and have remained there ever since.

Before the death of Magra, he installed the idea that strength was essential and the tribe’s survival depended on their fighting spirit. When their brother tribe of Gelkis centaur spoke out against this notion, arguing that Theradras always watches over the centaur and will keep the tribes safe and alive, an eternal feud between the two tribes was born.

The life-long pursuit of strength has carried on through the Khans of Magram to this day, turning them violent and determined. To solidify their title as the strongest the tribe still fights fiercely to weaken or destroy their brother clans, viewing the Kolkar as weak, the Gelkis as nothing more than a nuisance, and the Maraudine as a formidable enemy.

It can be assumed that the Magram’s culture has developed into revolving around strength worship above all else. When compared to the Gelkis, the Magram hold very primitive forms of speech and social structure. For example, their grasp of common is limited and the position of Khan would likely be sought through a death match of sorts.

Horde forces sent by Thrall quickly discovered that the centaur were slaughtering their other tribes just as much as they were attacking outsiders. When they investigated further they met Warug, who told them of the origins of the centaur and Theradras's recent actions, how she had empowered the centaur because she feared the Horde would drive them to extinction. The Horde allied with Warug and the Magram, who held no loyalty to Theradras unlike the other clans, to suppress the other tribes. They then entered Maraudon and slew Theradras. Their victory halted the spreading corruption in Desolace and stopped the violent bloodlust in the centaur. With the Horde's blessing, the Magram became the leaders of the united centaur and led them to an age of tranquility. Yet none knew how long they would stay on the path of peace.[1]

This changed when the Burning Blade and their demon master took their home, forcing them out to the north where they slaughtered the Kolkar clan and took their homes as their own. Since then they have become untrustful of outsiders and openly attack anyone that approaches their new land.

The assault took it's toll on the Magram, many were killed, and those that survived are weak from hunger. They struggle to survive in the wasteland they took from the Kolkar. No longer able to provide for themselves, they have taken to stealing from others, such as the nearby Cenarion Circle.

They eventually join forces with the Kolkar and Gelkis, after being beaten in combat, in order to defeat the demons.

Some time after the Cataclysm, the Magram and other clans of centaur joined under the new High Khan. 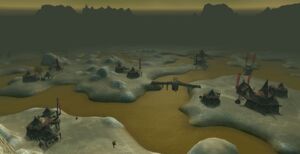 Since its founding, the Magram tribe has not ventured past the borders of their native homeland. Situated in the southeast, within range of the Valley of Bones, lies the Magram Village. Patrols of warriors and spell casters line the borders of their settlement, the many tents within housing their beast of a Khan, Jehn. Like the Kolkar, the Magram have domesticated hyenas and utilize them for scouting purposes around the village.

Southwest of the Magram Village is a great valley infested with undead known as the Valley of Bones. The ghosts of Magram ancestors roam here undisturbed among the two giant serpent skeletons that line the valley. It is believed that Magram and their necromancers may be creating a "new" scourge, and this makes them a potential danger to everyone.[2]

These centaur have made their home in the eastern region of Desolace. Mortal enemies of the Gelkis Centaur.

[35] Death to Agogridon, with the latter granting enough reputation to reach Exalted ranking with the faction.

Should the player have already finished the quest before Patch 8.0.1, they can speak to Karnum Marshweaver at Karnum's Glade to receive the reputation reward.

The clashing cultural values of the Magram and Gelkis are the founding reason for their animosity towards one another, and it has only spiraled downwards since their initial disagreement. While the Magram only respect strength, the Gelkis respect nature and their birthmother Theradras, calling upon her protection and the power of earth to maintain their existence. The Magram view this as weak however, especially their trust in Theradras to protect the centaur tribes.

The Magram representative Warug, stationed at the base of the mountains on the eastern borders of Magram territory, recruits foreign aid to strike against the Gelkis and organizes strategic missions to weaken them. In order to be deemed worthy of fighting with the Magram, adventurers must gain reputation with the tribe by slaying members of the Gelkis until they reach Friendly status with the Magram. Each kill gives 20 (22 with

[Diplomacy]) reputation to the Magram faction and lowers the reputation of the Gelkis by 100. Reputation with the Magram from kills caps at 11999/12000 Honored, or one point below Revered. Reputation can be gained past this point by completing Magram quests.

In earlier builds, a player could become friendly or higher with both Centaur clans at the same time, by having someone else in a party kill a member of the Gelkis or Magram, which would cause the player to gain reputation with one Centaur clan, while not losing reputation with the other. As of patch 2.2 the player will gain and lose reputation regardless of who in the party actually does the killing.

The Outcast Necromancers are from the Magram clan.[3]