Magtheridon's Lair is the raid wing of the Hellfire Citadel dungeon in Outland where you fight the brutish pit lord Magtheridon himself. You can find the entrance to Magtheridon's Lair on the very bottom of the western side of the Citadel (opposite side from the other 3 entrances). It is a quick raid encounter (like Onyxia's Lair, which contains four "guard mobs" before the boss encounter, Onyxia).

After the Legion came to Outland, Magtheridon controlled all but small pockets of Outland. Even so, he was taken largely by surprise when Illidan and his allies conquered the Black Temple. Many believed that Magtheridon had been slain in the attack, but, when Illidan discovered that Magtheridon's blood had a transformative, corrupting effect on orcs, the beaten pit lord was dragged to Hellfire Citadel.

Bound by chains both physical and magical, Magtheridon survives, at the brink of death. Each day, Illidan's minions drain his tainted blood, pooling it for a purpose as malevolent as Magtheridon himself: the creation of a new army of barbaric fel orcs.[1] 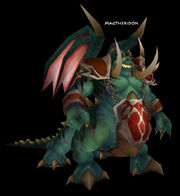 The only boss in Magtheridon's Lair