Magtheridon is a quick raid encounter, similar to that of Onyxia's Lair, it's the raid wing of the Hellfire Citadel dungeons. The first phase of the fight is a relatively simple gear check/DPS race, the second phase an interesting battle for survival.

No special buffs or gear are required, fire resistance in particular is *not* needed. Warlocks and hunters are handy for Infernal CC, but not needed.

Initially, five Hellfire Channelers are distributed around the room, each next to a Manticron Cube. All mobs in the room have no aggro range, the fight is started by any harmful action.

It's best to have one tank and one healer assigned to each Channeler so that they can be tanked in their places and their shadow volleys do not overlap. If only four tanks are available, the first two Channelers can be tanked together. All other raid members start out at one Channeler, and then work their way (either clockwise or counter-clockwise) through the room.

After the first attack on a Channeler, the raid has 120 seconds before Magtheridon becomes active. During that time, as many Channelers as possible must be killed, three must be dead at least when the boss enters the fight.

All Channeler casting should be interrupted as much as possible, the most dangerous being Dark Mending. After the first adds are dead, free healers should concentrate on the later tanks because they take more damage.

The Infernals should be banished, kited, or simply tanked. Warlocks and Hunters can do this job - early on they're free to DPS, but when Infernals start to appear they can concentrate on them. Tanks whose Channeler is dead or not being dpsed down can pick up roaming Infernals (although they should be careful not to drag Channelers close to the current dps target, or they risk a Dark Mending).

When Magtheridon breaks his banish, he starts to build threat only when he actually targets someone. Use aggro building moves or

[Misdirection], but not too early - let him target someone first. Besides killing any remaining Channeler(s) first and then nuking Magtheridon, the raid has to avoid Blast Nova by clicking on the cubes (see below). This is complicated by Quake, and in Phase 3 by Collapse.

At 30% Magtheridon shatters the walls of his lair, causing the roof to crash down. This deals 5250-6750 physical damage plus a 2 sec stun to every raid member. It's very bad if the start of phase 3 coincides with a Blast Nova. Therefore, DPS should stop at about 35%, wait until a Blast Nova is over, and then quickly bring him below 30%. For the remainder of the fight, the ceiling randomly caves in on players ('Collapse). Collapses kill everybody in an 8 yard radius of the spot of impact. There is a cave-in animation shortly preceding it so players are able to safely move out of the way.

[Ice Block] etc.), but be careful to time these abilities correctly. The animation starts about 15–20 seconds before the raid actually takes damage.

During both Phases 2 and 3, Quake makes clicking the cubes more difficult. Since the cooldowns of Quake and Blast Nova are slightly different (50 and 60 sec), after three or four cycles, they happen at nearly the same time (fortunately Blast Wave cancels any active Quake), and then move out of sync again. It is important to know that each cube has a "safe spot". Standing up against the wall, directly behind the cube when facing into the middle of the room grants immunity to the knock-back from Earthquake. People standing there simply bounce in place.

Cube clicking should be done by the most reliable raid members, it's the single most important element of the fight. All other things being equal, it's possible to have the off-tanks from phase 1 do the clicking, because their DPS usually are the lowest, and they have higher HP and thus can keep the channel up for longer. It's desirable to keep channeling the cubes as long as possible, but staying alive is actually more important. Clickers should synchronize the release so that nobody takes unnecessary damage.

Even at level 80 Magheridon can be expected to take a decent sized raid group. The channelers require a lot of DPS, or an interrupt heavy raid to kill by the 120 second mark. Level 80 raid composition should contain two tanks, at least two healers, and loaded on DPS that can interrupt. Also a good geared Paladin or Death Knight tank can solo Magtheridon.

At level 90, soloing Magtheridon's Lair is rather simple even in a mix of uncommon, rare, and epic gear.

Firstly, clear all the trash mobs as they will come to defend Magtheridon should you attack him.

Attack the Channelers. For the next 120 seconds, you will be fighting the Channelers and their 5 summoned Abyssals. You should be able to kill all or most of them before the next phase begins.

After 120 seconds, Magtheridon finally breaks free and joins the fight. It is quite a simple tank and spank fight. The Quakes and Blast Novas that he casts are little more than a nuisance at this level. The same is true for Collapses that occur once he reaches 30% health.

The whole instance can be done in 15 minutes or less.

Killing Magtheridon is required for

[70R] Trial of the Naaru: Magtheridon, the last quest to obtain the

[The Tempest Key]. Even though the key isn't needed to get into The Eye anymore, the quest is still there, and the regular rewards are still available. The title

[Champion of the Naaru] was given to players who completed the quest, up until the release of patch 3.0. 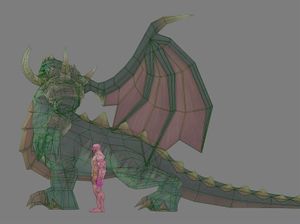 Magtheridon as seen in the Burning Crusade.

Magtheridon randomly utters these quotes as players progress through The Blood Furnace instance, as well as his lair:

In addition during the fight:

Aggro
Thank you for releasing me. Now... die!

Draining
Not again... NOT AGAIN!

Phase 3
I will not be taken so easily! Let the walls of this prison tremble... and fall!

Killing a player
Did you think me weak? Soft? Who is the weak one now?

Death
The Legion will consume you all!

See The Burning Crusade: Guild Progression for the first kills.

Mind Exhaustion debuff was reduced to 30 seconds from 90. Channelers will now only have one infernal active maximum.