Magtoor is a Broken located at the Harborage in the Swamp of Sorrows.

He was one of a few draenei who went through the Dark Portal with the hopes of finding a new life, and settled in the Swamp of Sorrows. Unfortunately, most of them were driven mad due to homesickness, and attack all on sight. There are a few, led by Magtoor, that remember their noble roots and survive on in the swamp separate of their mad brothers. Magtoor had the painful task to kill those who were once his brethren, until foul energies started corrupting his body. Anchorite Avuun now works to heal him.

Avuun efforts are in vain as nothing can cure his dying friend. Moment before he died, he was visited by Velen who had redeemed him by sending him into the Light. His body afterward disappears from Azeroth forever. 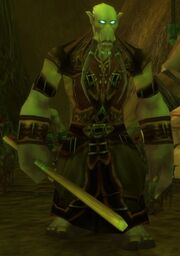