Not to be confused with The Maiden's Fancy. 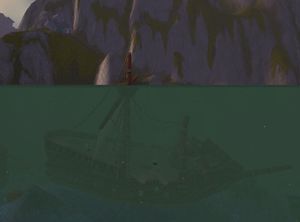 The Maiden's Folly lies broken on the bottom of the sea.

Maiden's Folly is one of two sunken Blackwater Raiders frigates located in the Drowned Reef in the coast of the Arathi Highlands. The other ship is named Spirit of Silverpine, and lies to the west of the Maiden's Folly. Both ships were part of an expedition, along with a third ship, the Harbinger, in search of a lost elven treasure. When the ships were signaled by Shakes O'Breen to come dock at their location, the sea rumbled, the tides lowered, and the two ships crashed into the reef.

Captain Steelgut was the captain of Maiden's Folly, and he watched all the survivors being killed by terrible beasts. He is not sure how he ended up on shore. Sadly, he was the only one to survive.