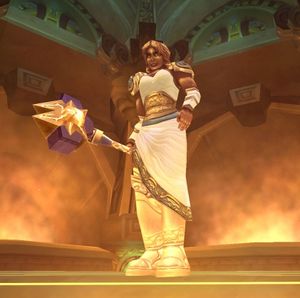 Maiden of Grief is a female titanic watcher boss in the Halls of Stone. She is wracked with agony over having to carry out the new orders given to her by Loken.[1]

Loken commands the forces of Ulduar, but not all serve him willingly. The Maiden of Grief has been ordered to destroy any who try reclaiming the Halls of Stone. She mourns turning on former allies, but fulfills her orders with violent purpose. Even her sorrows have been forged into weapons.

This fight is not similar to Maiden of Virtue in Karazhan despite the same NPC model and incapacitate effects. The fight is a moving fight with heads up tactics needed.

She occasionally drops a big void zone (Storm of Grief) under herself and puts a magical debuff dealing shadow damage (Pillar of Woe). Everyone including the tank should move out of it to avoid the relatively significant damage incurred. On Heroic mode, the void zone does a lot more damage (as much as 5400 a tick on a plate wearer).

She also casts Shock of Sorrow, which deals 1750 to 2250 shadow damage, incapacitates all group members for 10 seconds. This ability has a 4 second cast time. If the healer is positioned near a void zone they can jump into it to avoid being incapacitated for the full duration. In the event this happens too quickly, PvP trinkets are able to clear the incapacitate. This is NOT an aggro dump. However, if someone clears Shock of Sorrow and the tank doesn't she will attack that person as an NPC's tendancy is to not break CC. If all members are incapacitated she will attack the person with the highest threat.

On normal, the best strategy seems to be to have the casters stand in the middle of the room as the tank keeps her moving in a continuous circle around the outside perimeter. Before she finishes casting Shock of Sorrow.

On heroic, kite the boss around the perimeter and interrupt casting of "Pillar of Woe". The tank can jump into the void zone to negate the 10-second incapacitation during the casting of "Shock of Sorrow".

Aggro
You shouldn't have come... now you will die!

Stun
So much lost time... that you'll never get back!