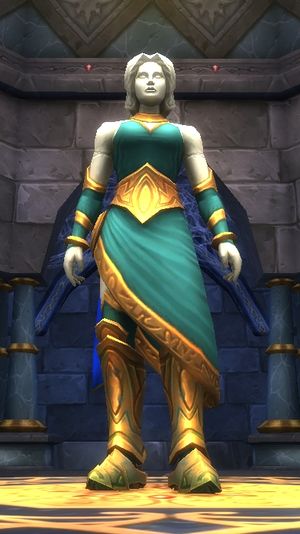 The Maiden of Virtue as seen in-game.

Maiden of Virtue is a titanic watcher boss in the Guest Chambers wing of Karazhan. She is, ironically, being the Maiden of Virtue, put behind the rooms that are full of ladies of the night. It is unclear how this happened or who sent her. The Maiden is optional; it is not necessary to kill her in order to reach other bosses.

The Maiden of Virtue does not have phases in her fight. She behaves the same from the start of the fight to the end.

The Maiden uses all her abilities at random, not on a strict timer. For example, when the Repentance cooldown is over, she does not always cast it immediately; it just means that it's possible for her to cast it. However, she does not cast Holy Fire while Repentance is active.

Wipes occur at this boss for mainly two reasons - either the tank dies while the healers are incapacitated from a Repentance, or too many raid members die from Holy Fire. A wipe is also possible due to poor positioning which leads to a chained Holy Wrath. Once these risks are managed correctly, this is a fairly easy fight.

Correct positioning of the raid is the key here, healer positioning in particular. Ranged and healers should be far enough away from the Maiden to be outside of the Holy Ground attack. At the same time, the whole raid needs to be in range and sight of a dispeller and be spread out far enough to avoid chaining Holy Wrath. These requirements are easily matched with the following setup:

There are eight pillars around the room. Put one non-melee raid member at the outside wall in each gap between two pillars. Place the healers opposite of each other. Melee and tank can start wherever they like.

Tank her in the center of the room, right where she stands. After the pull, the raid members all move to their assigned gap between the pillars and take exactly one step up the stair leading to her. This puts the whole raid in LoS, healing and dispel range of each other, but far enough apart to prevent the Holy Wrath from hitting more than the melee group.

Instead of standing between the pillars, it's just as good if the raid members stand with their backs to the pillars. Just synchronize so that everybody takes the left (or right) pillar, and no two people end up using the same one.

There are several ways to survive Repentance:

All of these methods work well, and they work better in combination with each other.

Holy Fire will quickly kill its victim unless removed. It is imperative to deal with it.

The easiest method to deal with Holy Fire is to have Grounding Totems up. With an alert Shaman and a little luck, this one totem can absorb all Holy Fires targeted at that group. With one shaman in each group, the fight actually becomes quite easy. Grounding totems have a limited range, so positions must be assigned carefully to make sure that everyone in the group is protected.

Holy Fire is a Magic debuff, and thus can be removed by the following:

Healers and dispellers must be very alert to deal with Holy Fire. Every raid member needs to be topped off at all times, and Holy Fires must be dispelled as quickly as possible. This cannot be stressed enough, as it is the most important aspect of the fight: Dispel as quickly as possible. Unless someone would die, cancel the spell you're currently casting to dispel immediately, so you spend less time and mana healing Holy Fire victims. Some raids place two dedicated dispellers on opposite sides of the room.

This is the first fight since Chromaggus where dispelling debuffs is critical. Priests and paladins that are new to this fight usually have some initial difficulty dispelling fast enough to avoid wipes. This is normal, so be patient. Once they have a little practice and figure it out, though, the Maiden is a fairly easy fight.

Aggro
Your behavior will not be tolerated.

Repentance
Cast out your corrupt thoughts.

Holy Fire
Your impurity must be cleansed.

Death
Death comes. Will your conscience be clear?

Boss Slayers Instructional videos on all the KZ bosses.
Retrieved from "https://wow.gamepedia.com/index.php?title=Maiden_of_Virtue&oldid=5427782"
Categories: