Maim Blackhand was the son of the former Warchief Blackhand the Destroyer and the brother of Dal'rend and Griselda. Along with Dal'rend, Maim served as the co-leader of the Black Tooth Grin clan until his death in Blackrock Mountain.

6 years before the First War, the warlock Gul'dan sought to convince Chieftain Blackhand to take up the mantle of Warchief of the Horde. To help convince the chieftain, Gul'dan taught some of the Blackrock clan's shaman in the ways of fel magic and how to rapidly grow adolescent orcs to adulthood by imbuing them with fel power. Blackhand was astounded by the results and ordered the shaman to transform his young sons Dal'rend and Maim into "proper soldiers".[3]

After their father became Warchief, Maim and his brother accompanied him to the Blade's Edge Mountains to forge an alliance with the ogres.[4]

When dragon riders dispatched by Nekros Skullcrusher found the Black Tooth Grin's vessels and delivered word of the Horde's retreat to Blackrock Spire, Rend and Maim ordered the Black Tooth Grin to alter course and sail to Stormwind. That region was still under Horde control, and from there they could reach Blackrock Spire by land. However, near the island of Crestfall, the Horde fleet was attacked by Admiral Proudmoore's Alliance navy, which was accompanied by Wildhammer gryphon riders. Rend and Maim's ship and a few other vessels survived intact, but most of the Horde fleet was sunk by Proudmoore's superior forces and the dragon riders scattered in all directions.[6]

While most of the rest of the Horde was defeated by the Alliance at the end of the Second War, Rend and Maim evaded capture and took control of Blackrock Mountain along with other Horde survivors, with Rend declaring himself Warchief of the weakened Blackrock clan. Dal'rend and Maim despised Orgrim for having killed their father and blamed him for the Horde's defeat, and the brothers now planned to reforge the Horde as they saw fit. They gradually reached out to other large groups of survivors, trying to rally them under their new banner. While the Bleeding Hollow clan ignored them, the Dragonmaw clan pledged their support and offered to give some of their enslaved red dragons to Rend and Maim's forces if they were ever needed.[7][8]

About a year later, the Dark Portal was reopened and emissaries from Ner'zhul, including Teron Gorefiend, were sent to make contact with Blackhand's sons and ask to borrow their captive dragons. Rend refused.[9][10] Some time later, Nefarian and his black dragon forces arrived at Blackrock and took control of the two brothers and the forces under their control.[11]

According to Eitrigg, Rend and Maim continued ruling over Blackrock Spire, in constant conflict with the Dark Iron dwarves. They eventually managed to displace the dwarves in the upper portion of the city, but only after the dragons came and only after the death of Maim.[7]

In the canceled Warcraft Adventures, Maim and his brother Rend were the two who killed Thrall's father Durotan. They were traitors to their race, as they collaborated with the internment camps system for gold and favors. They paid a fortune for the gnomes to create the black ale which would keep the orcs pacified, and were about to make a blood pact in agreement to aid Lieutenant Blackmoore with the forces of their Black Tooth Grin clan. Thrall interrupted the meeting by setting the room ablaze, and Rend and Maim were trapped between the fires, confronted by the orc whose family they had murdered. Rend, reduced to begging, tried to claim he was forced to by his father, but Thrall failed to fall for Rend's lie, and used their blood mixed together to kill them with the Eternal Damnation spell, causing their flesh to melt and their souls being sent to hell for all eternity.

After their father’s assassination, Maim and his brother Rend took what followers they could and splintered off from the Blackrock Clan, founding the Black Tooth Grin clan. They did this to retain some of the power which they believed was their birthright, without directly opposing Orgrim Doomhammer's accession to power,[12] so he would take no action against them. During the Second War, they were given control of the Dark Portal. Some rumors say that Maim retreated with Kilrogg Deadeye to Draenor, only to die there, either to human blades or as a victim of betrayal.[13] However, this was not the case.

Eventually, Dark Iron dwarves from Blackrock Depths tried to destroy the Dark Horde. The Dark Horde fought back, and Maim was killed in savage battle, however his sacrifice, plus Rend's "alliance" with the black dragonflight, allowed his brother to drive back the Dark Irons and maintain his hold on Blackrock Spire.[12] 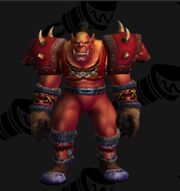 Maim in the Lord of Outland mission in Warcraft III: The Frozen Throne