"I go now to summon the lord whose house this is. Should you seek an audience with him, your paltry lives will surely be forfeit! Nevertheless, seek out his lair, if you dare!"

At the top of the elemental hierarchy, just beneath Ragnaros himself, resides Majordomo Executus. This flamewaker gained his exalted status by proving to be nearly invincible in the battles that raged within the elemental plane. Rumor has it that Executus supplanted Baron Geddon, and the two have been rivals ever since. Although this rumor has yet to be confirmed, there is certainly no doubt that Ragnaros does not tolerate failure. Thus, the lesser flamewakers (and, of course, Baron Geddon) eagerly await a misstep by Executus, anticipating their chance to vie for the coveted attention of the Firelord.[2]

Executus will only be spawned after you have deactivated the runes of warding. This means you'll have to defeat every other boss (except for Ragnaros, who is summoned after Executus's defeat, and Lucifron, who actually doesn't have to be killed[3]) in the Molten Core before you can fight him. Pre-3.0.8, you also had to douse the runes using

Executus comes with four Flamewaker Healers and four Flamewaker Elite guards making this a total of a nine enemy encounter. Executus will "submit" and the fight is won when all the adds are dead. He then appears in Ragnaros' chamber and will summon the Firelord to begin the encounter. Ragnaros will then, before he engages the players, kill Executus as punishment for not being able to stop them.

In Cataclysm it is revealed that Fandral Staghelm, after becoming the leader of the Druids of the Flame, replaced Executus as Ragnaros' majordomo. 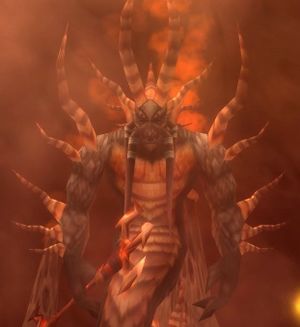 Majordomo Executus in World of Warcraft.

The Sons of the Living Flame.

Executus is not the target of this encounter; to win you must kill all his guards.

You can sheep the healers, however you can only keep them "chain-sheeped" for the beginning of the battle, but sheeping is disabled after 4 of the adds die. Use stuns and interrupts when bringing down the healers. This is important for stopping spell casting and bringing them down fast.

The MT, a hunter, and a paladin will engage Executus. The paladin will pull with divine shield. This paladin will attempt to stand closer to Executus than the MT throughout the fight; Executus usually teleports the closest player to him to the fire pit. The hunter distracting shots Executus whenever he charges off so that the tank can regain aggro. Executus is susceptible to Taunt, but teleporting the MT, thus lowering his aggro makes him randomly wander away from the MT and into the main raid.

Alternatively you can use a fifth Mage using

Mages will pull their adds from the group with

[Counterspell] and then sheep them. Hunters will pull their adds to the Tanks. From a Mage point of view, while sheeping, it is critical to drink a Fire protection potion 2 minutes prior to the fight. As well, while sheeping, you should ALWAYS have

[Mana Shield] up, as well as detect magic on the sheep. Never lose your target unless you are far away from all other sheeps and you keep your eye on it. Bandage right after casting a new polymorph. Do NOT

[Polymorph] while magic reflection is up. Sheeping is fine with damage reflection. At the pull, Mages should have mana shield up. Get within max distance of Counterspell and use it to pull aggro, and immediately sheep.

Be sure to keep notice of which shields are up on the mobs. White means that casters should take a break from hurling DPS, and purple means that melee classes should stay back (aside from the tank, who should be keeping aggro). We have mods which will give notification when the shields go up and down.

Each Paladin, except the portal caster, is assigned to a Mage. If the healer unsheeps while shield is up or the Mage dies, pally needs to stun or off tank till shield is down. Alternatively, you could use a hunter for this.

Every so often, Executus will give his helpers a shield. The shields last for 10 seconds and either have a 50% chance of reflecting magic attacks, or can reflect up to 100 melee damage when hit. Keep an eye on raid chat for these.

The order of the kills is important to new guilds trying this encounter and less so to those who have done this enough times to allow some small errors.

For new guilds, the most forgiving method is to kill one Elite, then the four Healers, then the other Elites. This means that you won't have tanks switching targets mid-way through the fight, with the exception of the Leading Tank. It also frees up the Mages a little quicker, increasing the DPS.

Assign one Tank to Executus. 4 Tanks to the Elites. 4 Mages to the Healers. One of the Tanks on the Elites is the Leading Tank. His Elite is killed first. He then chooses a sheep, and starts to tank it. Everyone follows him, and kills it. Then he chooses another sheep, and so on, until all of them are down.

Once the Healers are down, the Leading Tank makes his way to the nearest Elite, and the raid kills that. Repeat until all adds are down.

This battle is a test of the mana efficiency of the healers, who should bring as many Major Mana Potions as possible. Other raid members should be liberal in their use of fire and shadow protection potions, healing potions, and bandages.

Another way to do this is to sheep all 4 priests, then kill 2 elites (A & B). The raid then focuses 1 additional add (C), before killing 2 at the same time (D & E). It is a matter of preference whether to kill a Healer (C) and then eliminate the two remaining Elites (D & E) simultaneously, OR kill an Elite (C) and then kill a Healer (D) and the remaining Elite (E) together. Either way, there will be 2 tanks free when the remaining three Healers break out of

[Polymorph], which means 1 tank will have to transition from an add that was just killed to the third Healer. After the three Healers are picked up, they can be killed one by one.

This strategy frees the tank groups from excessive healing and allows more DPS to flow to the adds, but is a bit tricky to implement. Killing targets D and E in rapid succession allows the raid to not have to deal with 4 targets at once when the Healers become immune to

Polymorph the Healers, kill two Elites, and bring the other two Elites to 30% health. Break a sheep and kill that Healer; there are now 3 sheeped Healers and 2 damaged Elites. Break the next sheep and kill that healer - after it is dead, both tanks not tanking the Elites must pick up the Healers that have broken their Polymorphs, while the raid assist trains the two elites that were brought down to 30% earlier. Then kill the two remaining healers. The idea here is similar to the strategy outlined above, but wounding the Elites first allows the raid to kill not two but three adds in a row at the point of sheep becoming ineffective.

With level 80 healers and tank, and probably level 80 dps, too (or at least 70), pull Executus and keep him and all the adds on the tank. AoE the adds. Also, try to stay off the coals in case you have level 60-ish melee dpsers. 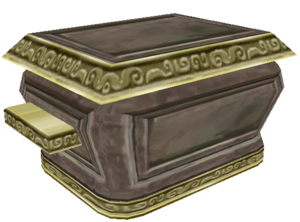 Cache of the Firelord.

Majordomo Executus himself does not drop loot as he does not actually die. He instead offers access to the Cache of the Firelord.

Reputation: Executus himself does not provide reputation gains with the Hydraxian Waterlords. However, both Flamewalker Healers and Flamewalker Elites provide 20 reputation each, for a total of 160 reputation per defeat of the encounter.

Intro
The runes of warding have been destroyed! Hunt down the infidels, my brethren!

Aggro
Reckless mortals! None may challenge the Sons of the Living flame!

Defeated
Impossible! Stay your attack, mortal... I submit! I submit!

Outro
Brashly, you have come to wrest the secrets of the Living Flame! You will soon regret the recklessnss of your quest.
I go now to summon the lord whose house this is. Should you seek an audiance with him, your paltry lives will surely be forfeit! Nevertheless, seek out his lair, if you dare!

"The Firelord and his brethren once held sway over this entire world, mortal. As a servant of the Old Gods, he fought against the Titans for domination of this planet. The victorious Titans banished my master and his brethren to the Elemental Plane - there to remain imprisoned until the end of time."

"A mere three hundred years ago, a reckless dwarf named Thaurissan summoned the master from his fiery realm. His return to this paltry world devastated the surrounding lands and created this volcanic Core. Mighty Ragnaros has slept under this mountain ever since."

What else do you have to say?

"We, his sworn servants, do his bidding and enforce his iron-rule. Cut off from the energies of his fiery realm, Ragnaros is but a shadow of his true self. However, he has more than enough strength to be your end."

You challenged us and we have come. Where is this master you speak of?"

(For the "continuation", see Ragnaros (tactics)#Quotes.)

Majordomo Executus from a Hunter's Perspective