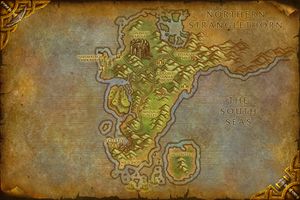 You aren't one of the zombies...

A troll? I did see one, just before the outbreak... He warned us, told us to be on our guard... But it was too late.

Your troll friend headed to Booty Bay to warn them...

I be tellin' Baron Revilgaz about the Zandalar threat now...

The flight master is not in phase, so get there the old-fashioned way.

Booty Bay is not phased, Bloodsail Buccaneers beware! Vol'jin can be found next to Baron Revilgaz and Fleet Master Seahorn on the bow of the inn-ship.

Bwemba says: Ahh, dere you are! We been searching da entire jungle for ya!
Vol'jin says: I see you were able to get some help.
Bwemba says: Da help's been good. Da Zandalar plan has set da Gurubashi on da warpath.
Vol'jin says: I know. It be why I went around, to warn everyone. When da leader of da Darkspear speak, everyone listen, Horde an' Alliance.
Bwemba says: Not all da places held together so well. We try to help as much as we can. But da source, it be Zul'Gurub.
Vol'jin says: Den dat be where we go next. We gonna stop dis uprising at da source.
Baron Revilgaz says: If you can keep my town safe, I'll definitely make it worth your while.
Vol'jin says: I got a few more tings to discuss here. Den I'll head to Zul'Gurub. I will see you dere.
Vol'jin says: Good work Bwemba, you an' your friend, make da Darkspear proud.