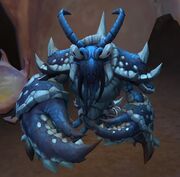 The makrura, sometimes known as lobstrok,[3][4][5] are a race of aquatic humanoid lobsters (or more likely crayfish) that live primarily in the sea, but are capable of surviving on land for short periods of time. These crustaceans live in colonies along the shores of Azeroth and in the deeper oceans.[3]

They are most commonly found on the coastlines of Durotar, The Barrens, Desolace, Dustwallow Marsh, Borean Tundra, Vashj'ir and recently Pandaria. Some were also found in the waters surrounding Sardor Isle in Feralas and around the Temple of Arkkoran in Azshara.

Brann Bronzebeard believes that they may be descendants of a lobster Ancient Guardian, though for the moment this is only a theory.[6]

The lobster-like race of makrura, while widely considered primitive, has an innate capacity for water magic.[7]

They are also found on Draenor.

Makrura are aquatic creatures that superficially resemble enormous crayfish, and uneducated observers have mistakenly dubbed them "lobster men". They sport two strong pincers used solely for combat,[9] as well as six small tentacles close to the head that can be used for finer manipulation. They walk on four small legs that extend out from under a flat, flippered tail. Their carapaces come in many colors, including shades of red, blue, and black. Omnia scholars have suggested that the makrura have some capacity in magic. Some even possess a crude shamanic power, fighting with the force of water itself.[9]

Recently the makrura have shown increased activity on the shores of Pandaria, which suggests a possible future attack.[9]

Makrura as seen in Warcraft III.

The naga that settled in Zangarmarsh in Outland breed creatures called bogstroks that closely resemble makrura, although the bogstrok are thought to be native to Outland.[3]

The makrura are a race of humanoid lobsters from the capital city of Mak'aru, in the Eye,[10] that live primarily in the sea. Makrura speak Nerglish, and in fact they may have invented the language.[11] They use a primitive but powerful form of magic that is related to the element of water. They are also incredibly hostile and will attempt to kill anybody that comes near them. They are often found underwater guarding shipwrecks. Makrura are amphibious and dwell equally well on land or under water, although they prefer shallow, tropical seas. Makrura fight by grappling an opponent with one pincer and holding it in place while the other pincer tears it apart. Makrura defend their territory aggressively, and they attack murlocs and naga on sight.

Makrura are hardy creatures with exceptionally powerful pincers but they are clumsy, their primitive society allows for little intellectual stimulation, and their strange mindset unnerves others.[12] They are 12 ft. long, usually chaotic neutral and sometimes also speak Common, Goblin, Low Common, Nazja.[13] They weight 500 lbs.[14] and can be barbarians.[15]

Makrura have physical and magical prowess and are skilled underwater.[16]

Makrura society is matriarchal. Male makrura mate only once and then molt into sexless drones (although they are still referred to as “he” for all practical purposes). Makrura appear scattered and tribal, but in reality they have a large capital city, Mak’aru, in the Eye, close to the naga capital of Nazjatar. Makrura are primitive, knowing little of advanced magic, craftsmanship, or technology. They use tools only to build their crude underwater dwellings and shellfish traps, or to break apart giant clams (their favorite food). Makrura decorate their hard carapaces with tribal markings and colors, but otherwise disdain clothing, armor, and other trappings of civilization.

Their carapaces come in many colors, including shades of red, blue, and black. Makrura, regardless of gender, are typically 12 feet long and weigh 500 pounds. Both appear identical to non-makrura observers unless a female is carrying a clutch of eggs on her torso. Females typically bear several hundred eggs at a time, maintaining them for several months until they hatch, but less than one fifth of these survive to maturity.

Makrura have little or no access to advanced technologies, metalworking, or arcane magic. The vast majority of heroic makrura are barbarians. Scouts, warriors, and healers other than shaman are uncommon, while arcanists and tinkers are virtually unknown. Makrura are gregarious by nature and fiercely protective of their fellow makrura and their communities. Occasionally, though, a wanderer sets out on his own, driven by a desire to explore and see new things.[12]

Makrura suffer from the extreme disadvantage of being tasty to many carnivorous races, a fact appreciated all too well by their enemies on both land and sea. While land dwellers sometimes hunt them for food, a makrura’s most hated enemies are murlocs and naga (but especially the latter). Murlocs consider makrura a snack to be eaten raw, while naga maintain a wide variety of makrura recipes and sometimes raise the poor creatures from birth in special farms.

Many of these individuals turn to the land, where the dangers posed by murlocs and naga are not as acute. Wandering makrura are rare, so much so that members of the Horde or Alliance don’t know what to make of them. If a makrura can speak an understandable tongue, he might be able to make his own way, but he is always treated with curiosity or outright wonder. In wilder areas, their resemblance to shellfish might cause a makrura to be mistaken for a walking seafood dinner.[12]

The lobsterlike makrura hate the naga and are their chief enemy. They don’t take kindly to outsiders of any kind, but their war with the naga — which has been going on for who knows how long — makes them potential allies. They are protective of their homeland.[17]

Makrura speak Nerglish, a low aquatic tongue. Makrura sometimes learn the language of their hated enemies, to better combat them. Those makrura who deal with shore-dwellers may learn languages appropriate to trading and negotiations.[18]