Mal'Ganis (or Mal'ganis) was one of the nathrezim sent by Archimonde as a jailor of the Lich King. He was chosen to head up the plot to turn Prince Arthas Menethil to darkness, and make him the Lich King's greatest champion. Later he led the Scarlet Onslaught under the guise of Barean Westwind.

At Kil'jaeden's command a group of dreadlords consisting of Mal'Ganis, Tichondrius, Balnazzar, Detheroc, and Varimathras tortured the orc shaman Ner'zhul after he had escaped from Draenor to the Twisting Nether. Eventually, Ner'zhul, his sanity cracking, would agree to serve Kil'jaeden. Kil'jaeden passed the orc's spirit through death and revived as a spectral entity. The dreadlords bound his disembodied spirit to a specifically crafted set of armor and a mighty runeblade called Frostmourne. These items were locked in a diamond-hard block of ice to imprison Ner'zhul.[1] The Lich King and the dreadlords who had tortured him were then sent to Azeroth in order to weaken any resistance that the Burning Legion would in face during the Third War. While the Lich King gathered his strength, Mal'Ganis and his fellow dreadlords would serve as jailors and executors meant to hasten the Lich King's task by any means necessary. To this end, they would construct the Icecrown Citadel within Northrend. Though seemingly broken by the dreadlords, Ner'zhul sought vengeance and was able to play on the dreadlord's fears of Kil'jaeden in order trick them into allowing him to hurl Frostmourne out of the Frozen Throne.[2] 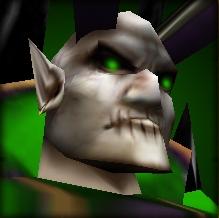 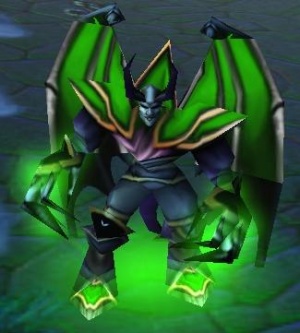 As Arthas and Jaina Proudmoore were investigating rumors of plague, they were attacked again and again by the forces of the Scourge posing as the personal army of the dreadlord Mal'Ganis. Kel'Thuzad helped play the part by telling Arthas that it was Mal'Ganis himself and not the Lich King behind the plague.[3] Each attack, each town destroyed hit at Arthas' weakness, his pride. Arthas began to take his inability to protect his people from the Scourge personally, and soon became obsessed with killing the dreadlord.[4]

Mal'Ganis led Arthas to Stratholme, and left him with the choice of either slaughtering all of its inhabitants or watching them fall to the plague. Arthas chose to kill his own subjects rather than let them become slaves to Mal'Ganis in death, killing most of the inhabitants of the town. Mal'Ganis was there in the wreckage, and goaded Arthas once again to come to Northrend to finish their battle.[5] As expected, Arthas took the royal fleet and sailed north.[6] The Prince's obsession with the hated dreadlord led him further down the path of evil, first lying to his men, betraying his mercenaries,[7] and finally forsaking his own soul to take up the runeblade Frostmourne, grievously wounding Muradin Bronzebeard in the process.

The moment Arthas took up Frostmourne he became a tool of the Lich King, completely subservient to his will. This was what Mal'Ganis had planned all along. Confidently he approached Arthas and informed him of his fate. However, the manipulative and traitorous dreadlord was himself betrayed, as the Lich King's first whispers to Arthas were that the time for his vengeance had come (this was the first step towards Ner'zhul's independence). Arthas defeated the dreadlord,[8] and both Arthas and the Lich King believed him to be slain.[9] However, the dreadlords had ensured they would be shielded from the power of Frostmourne when they created it. The sword was incapable of consuming Mal'Ganis's soul, which instead returned to the Twisting Nether where he would be reborn in a new body.[10] 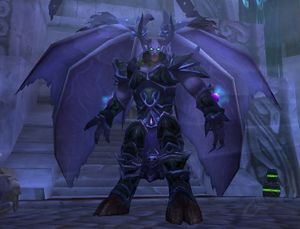 Mal'Ganis in World of Warcraft. 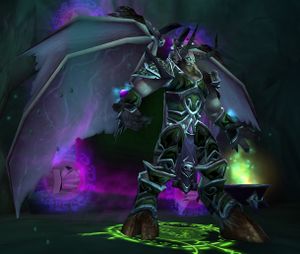 Mal'Ganis is the final boss in the Stratholme of the past, the fourth wing of the Caverns of Time that opened with the release of World of Warcraft: Wrath of the Lich King. In the Warcraft III scenario The Culling, Mal'Ganis would always resurrect after a certain period and return to continue his corruption of the city. In the instance, however, once Mal'ganis is taken to 1% health, he teleports out of the city after telling Arthas to meet him in Northrend.

Recent discoveries have shown that this is not the case. Mal'Ganis is still alive — under the guise of Barean Westwind — and has taken over control of the Scarlet Onslaught, much like Balnazzar had done with the original Scarlet Crusade. He stood in seclusion in Onslaught Harbor until agents from the Knights of the Ebon Blade forced him to show his true identity and flee back to his homeworld. He claimed to be plotting his revenge against the traitorous Lich King, but this never came to fruition.

Mal'Ganis is one of the many demons summoned by Gul'dan in front of the Tomb of Sargeras to attack the forces of Azeroth in the climactic, disastrous battle at the Broken Shore.[11]

Mal'Ganis has not appeared since then and his location is unknown. 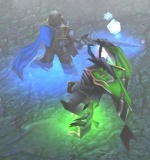 Mal'Ganis appears as a legendary card for the warlock class in the Goblins vs Gnomes expansion for Hearthstone. His flavor text reads: "Mal'Ganis doesn't like being betrayed, so if you discard him, watch out."

His card art was originally created to depict Varimathras in the TCG.

Mal'Ganis is a playable character in Heroes of the Storm.