Malace Shade first appears as a guard in Starfall Outpost in Shadowmoon Valley. She then briefly accompanied Cordana Felsong into the northern Frostfire Ridge. She is also seen in Yrel's Watch in Nagrand.

She is later encountered by demon hunters in Stormheim having been captured by the Tideskorn tribe of vrykul. Once freed, she attacked the fel lord Lochaber. As a reward, she told the Illidari where to locate the

[Sargerite Keystone] and left the place. 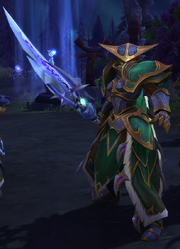 Malace, alongside many of her other warden sisters, answer Maiev and Tyrande's call to action in Darkshore. She fights alongside the other wardens defending the eastern flank. Here, she does not use a typical glaive, instead, using a two-handed one.