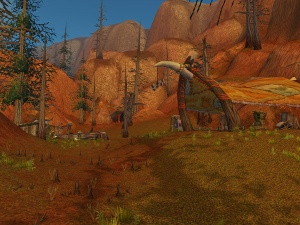 Malaka'jin is a Horde village in the Stonetalon Mountains, just south of the Grimtotem Post. It houses a small community of troll hunters who make a modest income by selling their catches to passing Horde adventurers.

Malaka'jin expanded into a quest hub with a flight master. It is from here the Horde will launch their attacks against the Grimtotem tribe in Stonetalon. The High Road from the Southern Barrens also connects here.

Inside this troll encampment, night elves are being held by the shaman Jin'Zil, who seeks ingredients for his voodoo potions. Even so, there aren't enough trolls here to be a great threat to the elves.[1]