For information on how to defeat Malkorok in the Siege of Orgrimmar, see Malkorok (tactics).

“I will never fail the warchief!”

— Malkorok during his final fight

Malkorok was an orc of the Blackrock clan who served as Garrosh Hellscream's bodyguard and chief advisor throughout the Pandaria campaign, as well as being the new leader of the Kor'kron. During the Siege of Orgrimmar, Malkorok was infused with the power of the Heart of Y'Shaarj but was ultimately slain by adventurers of the Alliance and Horde.

Formerly a member of the Blackrock clan in the service of Rend Blackhand, he renounced his former warchief and vowed allegiance to Garrosh. He is shown to be just as radical as Garrosh, if not more so, possibly a trait he has retained from his service in the Dark Horde under Rend. He believed that anyone who questions Garrosh should be executed.

When the leaders of the Horde gathered to hear Garrosh's plans for Kalimdor, Malkorok was present as he opened the meeting. He was ordered to stand down by Garrosh when he got in Baine's way when the tauren showed his displeasure with Garrosh's planned attack on Theramore. Malkorok was also present during the private meeting between his Warchief and Lor'themar Theron where Garrosh praised Lor'themar for his loyalty to the Horde's Warchief. When Garrosh became unnerved with Lor'themar's declaration of loyalty to the Horde, due to him not outright stating his loyalty is to Garrosh, he declared to Malkorok that Lor'themar should be watched. In turn, Malkorok declared that they all should be watched: not necessarily all of the leaders, but the entire Horde.

Sometime afterwards, Malkorok and group of Kor'kron soldiers went to Kor'jus's shop within the Drag, to punish him for merely disagreeing with Warchief Hellscream's plans. When Kor'jus said his shop was closed, Malkorok replied that they were not there for supplies; they were there for him. He was then taken into custody where he was beaten and then returned to his shop looking worse for wear. Malkorok's abductions are an unspoken truth in Orgrimmar; sending out a rather dark warning to vocal dissenters.

When the time came for the attack on Northwatch Hold, Malkorok personally accompanied Garrosh to Ratchet and participated in the destruction of Northwatch. While others were horrified by the Horde's use of molten giants, Malkorok saw no problem with it. When Baine, who had learned from Kador Cloudsong that the molten giants were enslaved, confronted Garrosh about the use of such tactics, Malkorok quickly got in his way and ended up challenging Baine to a mak'gora for constantly questioning Garrosh's actions and not showing him the respect Malkorok feels he deserves. Malkorok, who privately feels that the tauren are too soft and felt that the death of Cairne Bloodhoof was a good regardless of how it came to be, was disappointed when Baine refused the challenge.

Following the destruction of Northwatch, Garrosh kept the Horde army in place instead of marching directly to Theramore, much to the chagrin of those within the Horde ranks. When members of the Horde gathered to discuss what Garrosh was thinking by waiting, one of them tipped off Hellscream of their meeting. When Baine pointed out that they were all merely questioning the reasoning behind his choices and not plotting against Garrosh, Malkorok coldly noted that questioning the Warchief is questioning the Horde.

Malkorok is irritated by the brazen displays of discontentment in the Horde's ranks, and later on privately grumbled to Garrosh that he should have let him kill or punish a few of them. In turn, Garrosh told him that they were fine soldiers and that fear would keep them in check. Vol'jin and Baine were granted a meeting with Garrosh and both noticed that Malkorok was also present. The three leaders of the Horde had a polite conversation before Baine began to address his concerns and questioned Garrosh why it seemed he only listened to the Blackrock orc. After witnessing Malkorok being told to stand down, Garrosh mentions he had orders for the fleet while turning to Baine and Vol'jin. Feeling hopeful that Garrosh was either beginning the attack on Theramore or letting them in on his plan, both the troll and tauren were stunned when Garrosh's order was for the fleet to withdraw. As they left to carry out his order, Baine told Garrosh he hoped a Horde would be left after this debacle. As they were leaving the Darkspear and tauren leaders heard loud laughter from both their Warchief and his bodyguard.

When Hellscream finally gives the order for the army to march upon Theramore, they were attacked by the blue dragon Kalecgos and later attacked the Alliance forces in Fort Triumph. After Fort Triumph's fall, they reached Theramore Isle itself. Malkorok was dispensed to personally lead his Horde forces in an attack at the west gate. However, while marching to their destination, Malkorok's forces were taken by surprise by Alliance forces under the command of Pained, whom Malkorok personally fought with. After a fierce battle, the Alliance forces retreated and Malkorok was angry that not only had he been taken by surprise but that he was unable to kill the night elf.

Malkorok appears privy to the knowledge of Garrosh's tailor-made mana bomb and observes as the bomb itself, augmented by the stolen Focusing Iris, is dropped over Theramore. Elated, Malkorok cackles in triumph as Theramore and its defenders are utterly annihilated.

Following the successful campaign, the army journeyed back to Durotar where it experienced a split: those who approved of the use of the mana bomb headed to Orgrimmar, and those who did not journey to Razor Hill. Malkorok and those heading to Orgrimmar were greeted at the entrance by the orcish people who chanted Garrosh's name. After Garrosh gives a rousing speech of the past, present, and future of the Horde's dominion, those present all joined into a "Death to the Alliance!" chant.

While Garrosh and others celebrated in Orgrimmar, Malkorok led Kor'kron forces to Razor Hill. There, he scrutinized Kelantir Bloodblade and Frandis Farley for speaking against Garrosh and casually murdered the two with frag grenades after leaving.

When the Alliance led by King Varian Wrynn launched an attack on Orgrimmar, Malkorok was quick to join his warchief in battle. After the Horde controlled Kraken pushed back the Alliance fleet and were subsequently destroyed by Jaina Proudmoore's water elementals, Malkorok witnessed Garrosh's rage against the fact that the Alliance had been able to escape and reclaimed Northwatch. After being informed that the Alliance intended to end the Horde blockade with the rescuing of the captured port, Garrosh ordered Malkorok to order a full retreat.[2] 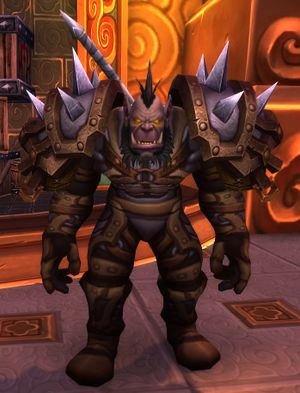 Malkorok in the Shrine of Two Moons. 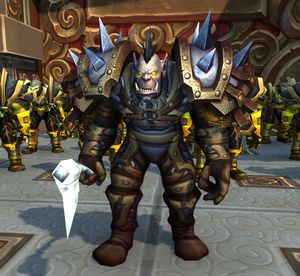 Malkorok at the Emperor's Reach. 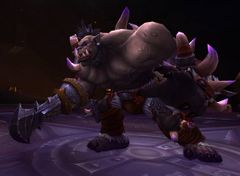 Malkorok after being infused with the power of Y'Shaarj.

After the Horde found Domination Point, Warchief Hellscream journeys to the Shrine of Two Moons and is soon joined by Malkorok and a Kor'kron guard, along with Lor'themar Theron and the regent lord's own presumed bodyguard, Ellendra Palescorn. Malkorok informs Garrosh that the tome of pandaren history had written the Mogu, the former rulers of Pandaria, as a cruel, relentless people who ruled by fear and not love. In turn, Garrosh remarks that he has much to learn from these Mogu.[3]

Malkorok accompanies Garrosh during his quest to find the

[Divine Bell] and is later seen with his Kor'kron forces when Garrosh uses the Divine Bell at Emperor's Reach.[4]

Garrosh has not given up on his desire to wield Pandarian artifacts and sends an excavation force to find and unearth a mysterious artifact.

After Grizzle Gearslip and his team find the mysterious artifact, Malkorok and some Kor'kron forces arrive. Malkorok tells the goblin to step aside, as they have found exactly what Garrosh hoped to find in the vale. When Grizzle wants to collect the money from Malkorok Garrosh promised them, he is confused as he received barely a fifth of the promised payment. Malkorok tells Grizzle that he is paid for all workers currently alive, as the Warchief does not compensate the dead, reasoning the low payment. Grizzle tries to remind Malkorok that there was a contract and its stipulations state that he simply has to pay them properly. However, Malkorok loses his patience, grabs Grizzle by the neck and yells at him; stating that dying in the service of the Horde should be a great honor but Grizzle just sees the dead as an opportunity and uses them to make more money, disgracing the honorable death in the service of the Horde his (now dead) workers had. After Malkorok lets go of Grizzle, the goblin mumbles how Garrosh will see who will have his back when it counts but distracts Malkorok with flattery and runs away before Malkorok fully notices his treasonous comment. Malkorok and his Kor'kron then secure the chamber with the mysterious artifact and a titan-made Watcher named Norushen.

Malkorok has been Garrosh's most loyal and trusted lieutenant throughout the Pandaria campaign. When the Warchief needed a volunteer to infuse with the power of Y'Shaarj, it was only natural that Malkorok would offer without hesitation.

Malkorok resided within the Underhold during the Siege of Orgrimmar. After General Nazgrim's death above ground, Malkorok took over the defense of Garrosh's compound and attempted to hold the line. He was killed in the ensuing battle.

Malkorok appears as a legendary card for the Warrior class in the Whispers of the Old Gods expansion for Hearthstone. His flavor text reads: "Garrosh's best buddy. It's true. Look it up."

It is unknown to what extent Garrosh has ordered the subjugation of those who question him, or how much of it is Malkorok acting on his own. What is known, however, is that Malkorok truly believes in the necessity of his actions, and that Garrosh gives it at least tacit approval.[2] This was even presented by Baine during the trial of Garrosh.[6]

However, his dialogue reveals that he is indeed being tasked by Garrosh personally: "This is the task you set me to, great warchief. To root out those who would defy your leadership and thus become traitors to the glorious Horde."[7] Furthermore, during Garrosh's trial, he was just watching Malkorok and his Kor'kron beat up Kor'jus with disinterest.