Not to be confused with Malorne Bladeleaf.

Malorne, or, as he is referred to by the tauren, Apa'ro, is a powerful and wise Ancient Guardian who takes the form of an enormous white stag. He was one of the first living beings on Azeroth,[1] and long ago, he roamed the land as protector of nature. His power lay in nature itself and he is responsible for the creation and nurturing of nature in the world. He is the father of Cenarius, who inherited his dominion over nature. Though the great stag was killed by the demon lord Archimonde during the War of the Ancients, he was resurrected following the Cataclysm to aid the Guardians of Hyjal in battling the forces of the Fire Lord, Ragnaros. During the third invasion of the Burning Legion, Malorne became trapped by Xavius in the Emerald Nightmare until he was freed by the Archdruid of the Cenarion Circle.

The earliest record of Malorne is in the tauren myth The White Stag and the Moon. It describes how Malorne, being hunted by the tauren, bargained with Elune in exchange for help. Malorne accepted Elune's help and loved her as part of the deal.

Another version of the tale says that Malorne fell in love with the goddess of the moon during the world's first nightfall. Her light guided him through the woods and showed him he was not alone. It banished fear and brought hope. Many creatures have loved the moon and pursued her to madness. She grants light as she will, on her own timetable, and moonlight cannot be captured or possessed. Even so, night after night, the White Stag chased her across the skies. He grew so swift and strong that at last, he succeeded in reaching her. She was so moved by his devotion and beauty that she made him her consort. To this day he loves the wilds best when they are lit by her radiance.[2]

Whatever the truth may be, eventually Malorne became Elune's consort. Elune gave birth to Cenarius from that relationship.[3]

Because Ysera the Dreamer agreed to act as Cenarius' foster mother, she has often been mistaken for the demigod's true mother. As a result, there are also rumors that she and Malorne had a romantic relationship. However, such rumors are baseless, though Ysera had a deep affection and respect for the demigod. He was one of nature's mightiest champions and a frequent visitor to the Emerald Dream.[1]

During the War of the Ancients, Cenarius appealed to Malorne and the other demigods of Azeroth to join the battle against the Burning Legion. After much debate, Cenarius persuaded them to unite under the command of Captain Jarod Shadowsong, who was leading a large army of night elves and other creatures against the Legion.[1] Cenarius had gone into a frenzy seeing Ursol, Ursoc, Aviana, and Agamaggan die. Cenarius crushed hundreds of felguards and felhunters. The demons finally got hold of Cenarius, but before the demons could slay him, Malorne came into the fray blinding all demons with his majestic white flashing body. Malorne's hooves crushed many demons, while his antlers killed many others. Malorne defended his son Cenarius, and with a look toward the elves as if telepathically commanding them to come for his son, Jarod Shadowsong and others dragged Cenarius to safety.

Malorne's fury might have begun to turn the tide against the Burning Legion, had Archimonde not appeared. Black lightning struck the land around Malorne, baking it, then green fire from the ground engulfed Malorne, burning at his coat, while the land and rock formed giant hands that pinned his four legs to the ground. Archimonde swelled in size matching Malorne's height. Malorne freed himself from his magical trap, and charged Archimonde with his antlers, causing tremors and lightning as demons and Azeroth' races nearby shook and fell to the ground flat on their backs with astonishment. Malorne and Archimonde battled for some time, until, finally, Archimonde managed to seize Malorne and with great force snapped his neck. Cenarius's brave rescuer and father, limp and lifeless, was tossed aside by Archimonde. Malfurion knowing Cenarius was unconscious and that Archimonde had just slain Malorne, cast a spell that engulfed most of Archimonde's body with vines. The Archdemon, analytical as always, decided to retreat by vanishing in a green flare of flames that consumed the vines.

Shortly thereafter (a few moments, in fact), Alexstrasza, Ysera, and Soridormi, along with their dragonflights, joined the War of the Ancients. Ysera came to a screeching halt at the sight of Malorne and opened wide her brilliant jade eyes (one of only a few times she did so in recorded history) with a deafening shriek. As she tore through the carnage to her friend, thousands of demons were thrown in all directions with her paws and wings. Her rampage continued, making her way through to her goal, until she came still, her chin on Malorne's head; sobs could be heard as She of the Dreaming mourned the White Stag's end.[4]

At the end of the quest

[85] The Sanctuary Must Not Fall, introduced in patch 4.2, Malfurion Stormrage successfully resurrects Malorne. After being resurrected, Malorne joins the Guardians of Hyjal and defeats Lord Rhyolith and the other enemies attacking the Sanctuary of Malorne in Mount Hyjal. He then runs off towards the Regrowth and is nowhere to be seen till after the quest

[85 Daily] The Power of Malorne, after which he appears at the Sanctuary once again.

Thousands of years ago, Malorne gave the

[Idol of the Wild] to the mortal druids and they kept it at Malorne's Refuge in Val'sharah. When the Emerald Nightmare returns during the Burning Legion's third invasion, the forces of the Dreamgrove attempt to retrieve the Idol only to find it has been stolen by satyrs. The Dreamgrove's Archdruid, Broll Bearmantle, and Sylendra Gladesong, the leader of Malorne's own Druids of the Antler, retrieve the Idol and bring it to the Dreamgrove, where the Cenarion Circle intends to use it to commune with Malorne at Nordrassil.[5]

At Nordrassil, the druids gather to call upon Malorne, where the white stag reveals that his mind has grown clouded. When he sensed the corruption of Shaladrassil, Malorne ventured into the Emerald Dream to destroy the Nightmare's source. But when he reached the Rift of Aln, he saw the Nightmare's true strength, that it will fester and grow like a disease until it engulfs all of Azeroth.[6] With Malorne trapped and no longer able to see the way back into the Dream, Remulos resolves to open the sealed portal to the Rift of Aln at the Emerald Dreamway and save his grandfather.[7]

Within the Emerald Nightmare, Malorne has become trapped in a recreation of his darkest nightmare: his death at the hands of Archimonde in the War of the Ancients.[8] The druids enter the Nightmare and help the Wild Gods to fight off the demons, culminating in aiding Malorne against a figment of Archimonde himself. After being freed from the Nightmare, Malorne travels to the Dreamgrove and grants the grove's Archdruid his blessing and the duty of using Malorne's power to serve and protect the wilds.[9]

Malorne was one of nature's mightiest champions and a frequent visitor to the Emerald Dream. Indeed, Malorne possessed a strong link to the Dream that was similar to that of a green dragon. He, too, had dreamsight, and so simultaneously perceived both the Dream and the current state of Azeroth. Malorne also possessed healing powers, along with a calming aura that sometimes stopped battles before they began. Furthermore, he was one of the first living beings in the world. By the time of his death, he had become one of Azeroth's most beloved and powerful demigods, and he was renowned for his wisdom.[1] 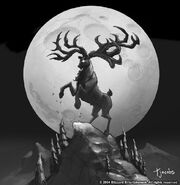 Malorne in the RPG.

Malorne the Waywatcher showed up to help the night elves when a great crisis affected the world or the night elf civilization. Although he has great magical power, he is never shapeshifted into any other form. The stag prevented two civil wars among the night elves simply by making himself present before the astonished eyes of the night elves. Malorne was an excellent diplomat, opening dialogue between and pacifying conflicting parties.[10]

Malorne appears as a legendary card for the Druid class in the Goblins vs Gnomes expansion of Hearthstone. His flavor text reads: "When Malorne isn't mauling hordes of demons, he enjoys attending parties, though he prefers to go stag."

There is some confusion as to the accuracy of the tauren tale, The White Stag and the Moon. It seems unlikely that a being of Malorne's power would fear the tauren, much less be hunted by them. The question is not about the parentage of Cenarius, but rather, about the circumstances that led to this liaison. Some think it unlikely that the tauren could have posed a threat to him, and thus question the hunt that chased Malorne into the sky. There are likely explanations for the story:

Given the tauren's reverent attitude towards demigods and other natural powers, however, it seems unlikely that they would even be hunting Malorne in the first place.

An explanation for this would later come from the tauren druid Matoclaw, who stated that Malorne was tracked by the "greatest tauren hunters," as supposedly catching even a glimpse of his shimmering hide would bring great fortune to their tribe for a generation.