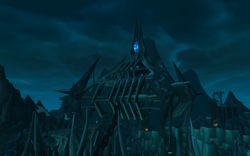 Malykriss: The Vile Hold is a Scourge necropolis under construction in Icecrown. Malykriss is being constructed entirely of saronite, the ore used to construct Icecrown Citadel and its defenses throughout Icecrown. When completed, this necropolis would be all but indestructible. It appears to be intended as the replacement for Acherus: The Ebon Hold, now held by the renegade Knights of the Ebon Blade. According to Crusader Olakin Sainrith, it is the seat of the Lich King's metalworking operations.[1] Malykriss isn't only a forge however; in the quarry below as well as in other locations the Host of Suffering trains new death knights under the leadership of Orbaz Bloodbane.

After Keritose Bloodblade finds out that all the saronite is being sent here, he sends the player to meet up with Vereth the Cunning to disable the Scourge operations here. First the player must subdue a Lithe Stalker. Using the Eye of Dominion to take control of the Lithe Stalker the player must then scout out Malykriss in order to find out what they are up against. Vereth thinks a citadel made out of saronite would be dangerous indeed, but he deems it uneccesary to destroy it, he rather halts the production. This will also ensure that the new death knights will be taken away from their leaders, so these can be destroyed before they become a real threat. In order to cause some disruption the player is sent to start fights, kill Gargoyles and take out Abominations. After this is done Vereth sends the player to kill the Death Knight leaders, Sapph the rider of frost, Rokir the rider of the unholy and Baelok the rider of blood. With the riders of the host of suffering dead, Vereth sends you to put an end to their true leader, Orbaz Bloodbane. 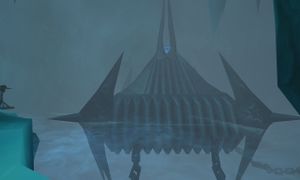 Malykriss type necropolis in the Halls of Reflection

A necropolis that shares a design with Malykriss can be seen in the ice cavern that leads to the Lich King's balcony in the Halls of Reflection instance.