For the tablet, see Mam'toth (object). 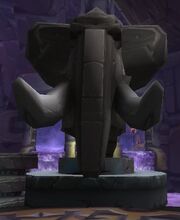 Mam'toth was a Drakkari mammoth loa. When he learnt of his worshipers' plans to sacrifice him to steal his power, he destroyed himself, his temple and all worshipers present, resulting in Mam'toth Crater.[1]

Instead of having permanently died from destroying himself and his spirit several years ago, Mam'toth's spirit is found recovering in a wildseed in the Tranquil Pools of Ardenweald.[3]