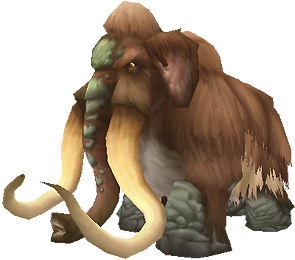 Mammoths are large, shaggy beasts found in Northrend that resemble behemoths or elekk. They can be found in the Borean Tundra, the Dragonblight, Sholazar Basin and in Zul'Drak. However, they are frequently hunted and slain by poachers, the most notable of which is Kaw the Mammoth Destroyer, a member of Hemet Nesingwary's hunting party.

They are used as mounts by the frost giants of the Sons of Hodir. 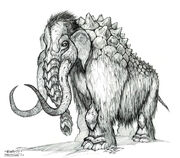 Normally placid beasts, these intelligent animals form a strong bond with their riders, making them loyal and fearless in battle.[1] Ancient manuscripts depict merchants traveling across the frozen tundra with these colossal beasts, leading scholars to believe they are the first domesticated mounts.[2] Riders and merchants alike trust only the strong and steadfast tundra mammoth to carry them safely across the frigid tundra.[3]

At home on the narrow, icy trails of the Storm Peaks, the grand ice mammoths are the only mounts the frost giants trust to carry large loads and multiple riders.[8] The Sons of Hodir believe that riding an ice-white mammoth will protect the rider from frostbite and snow blindness.[9] Many ice giants claim that they have trained their favored white mammoths to trigger avalanches with their trumpeting calls.[10]

Sure-footed and unflappable, the dark-furred black war mammoths are prized for their steady temperament going into battle.[11]

Mammoth mounts are Epic vanity mounts that were added in Wrath of the Lich King. Some can accommodate passengers, and they all (currently) have subtle (and sometimes not so subtle) shadings for each faction. You can also try out a mammoth mount for free during a D.E.H.T.A quest and deploy its devastating charge, trample, and bellow attacks.[12]

Mammoths were made tamable as a family of Tenacity hunter pets in patch 9.0.1. The family also includes elekks.

A mammoth in Warcraft III.