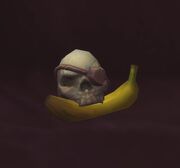 Man'zul is a member of the Goldtusk Gang at the Goldtusk Inn in Vol'dun. He was usually the brains behind the gang's thefts back in Zuldazar.[1] He is apparently quite bitter over his fate, insisting that the gang should have stuck to his plan. He wears a distinctive eyepatch that "twitches with magic" but which Rhan'ka considers to be uglier than a saurolisk's backside.[2]

Like most of the other Goldtusks, Man'zul initially appears to just be an inanimate skull that Rhan'ka talks to when adventurers arrive at the inn.[2] When Sandfury trolls attack the inn, Man'zul's skull is kidnapped and taken to the Sandfury Hideout (where it sits next to a bottle of grog) until Rhan'ka sends adventurers to get him back.[1] After adventurers are initiated into the Goldtusk Gang, they gain the ability to see the ghosts of the gang members.[3] Man'zul's ghost is seen floating in a corner at the back of the inn. He suggests that to better market the Goldtusk Gang, the inn should be adorned with a giant gold tusk. However, as he doesn't know where to find any gold tusks, Man'zul instead asks adventurers to retrieve a rib from the saurolisk Bloodcrest, which he carves to resemble a tusk and plants above the inn's entrance.[4]

I'm looking for a lost companion.

I'd like to heal and revive my battle pets.