Mana Burn is a Shadow-based Priest spell. It drains mana from the enemy, causing Shadow damage. 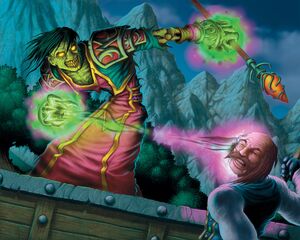 This ability was one of the demon hunter's abilities from Warcraft III. By channeling demonic energies into a bolt of negative energy the demon hunter is able to burn away an enemy's mana reserves.