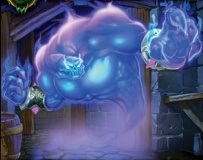 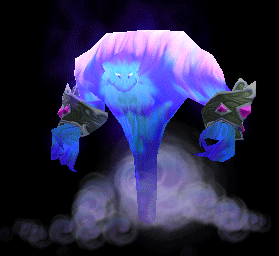 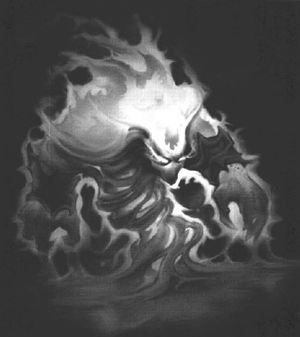 Mana elementals can also be summoned by powerful mages and bound to serve, similar to

[Summon Water Elemental]. Many can be found in service of organizations like the Kirin Tor, serving as guards or retainers. Arcane elementals are similar creatures.

Mana surges and arcane wraiths are both types of "mana elementals".[2]

Mana surges are magic-based elementals which are a type of air elemental[6] and are an example of an ooze.[7][8] Mana surges are approximately 1 foot in diameter and weigh almost nothing, although their relative size fluctuates depending on how much magic they have drained recently.[6]

Mana surges are air elementals spawned in areas where magical energy naturally combines with electrical storms. They consume magic and are drawn to sources of power, such as magic items or spellcasters. They move constantly but randomly, ever seeking new sources of energy on which to feed. Mana surges are aggressive, especially if they sense magic nearby. They distract foes with electrical charges while consuming whatever magic they can absorb. Once sated, they lose interest and fly away. A mana surge can be distracted by giving it a charged item, such as a wand or staff, to feed upon.

Although sometimes captured for use against spellcasters, they cannot be trained and make poor pets. Mana surges automatically sense the most powerful source of magic in the area and attack that opponent exclusively, ignoring all other threats. They drain magic until sated and then depart the area to digest. Mana surges have no sense of self-preservation and attack regardless of any danger to themselves.[6]

Mana surges are an aberration in the natural flow of magic. If ley lines and moon wells are the arteries and organs of the magical world, mana surges are its cancer. Some believe that these creatures are the side effects of powerful summoning spells or a violent disruption of ley lines. A few wizards research these creatures, hoping for some dramatic insight into the nature of magic. More experienced scholars warn all to stay clear. A mana surge is rather like an ooze in many ways, though its substance is incredibly concentrated magic rather than protoplasm. Mana surges are sometimes found with treasures. Random magical forces can transmute its surroundings into valuable metals or even enchant objects. Whether the mana surge wanders away before destroying such items is a matter of chance. Though a surge appears like liquid or gaseous coalescence of energy, its consistency is rubbery to the touch.[8]