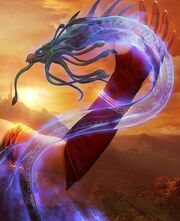 A mana wyrm in the Burning Crusade opening cinematic. 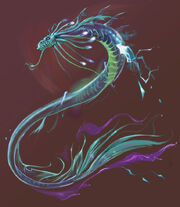 Art by Brian Huang for the mana wyrm in the The Burning Crusade cinematic.

Mana wyrms are small, simple, glowing critters that float around feeding off of stray pockets of arcane energy.[1][2][3] More worms than wyrms,[1] they are found in the blood elven lands and some Outland zones such as Netherstorm. More recently, mana wyrms have been found on the Broken Isles, predominantly in Suramar. They even live on Argus, having thrived there many millennia ago.[4]

Rarely does the sight of a mana wyrm cause a seasoned adventurer concern.[3] A wyrmling's temperament hinges primarily on how long it's been since it's fed on mana.[5] The extremely rare shimmering wyrmling species is prized for its unique coloration and even temperament.[6]

It is implied that the mana wyrms found on Sunstrider Isle were created by the Thalassian high elves along with tenders and arcane wraiths.[7] That is reinforced by the fact that the arcane-feeding creatures guarded the Burning Crystals that powered the isle's experimentation, before the Scourge invasion of Quel'Thalas drove them errant from the blood elves' magical control.[8]

When the Sunreaver Onslaught journeyed to the Dawnseeker Promontory on the Isle of Thunder, they brought mana wyrms with them. Though small in size, the wyrms have the ability to cripple the Kirin Tor Offensive casters in combat, and many have learned the hard way not to underestimate them.[9]

The nightborne of Suramar City house mana wyrms at the Twilight Vineyards. The wyrms prey on the insects that prey on the elves' trees, keeping the precious plants whole.[10] 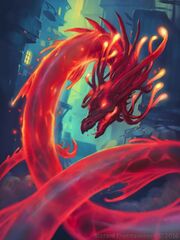 A "red mana wyrm" in Hearthstone.

Mana wyrms are tamable by hunters as part of the serpent family.