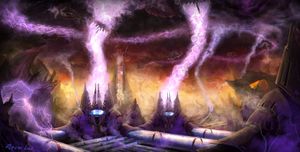 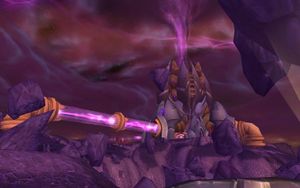 A manaforge operated by the blood elves. 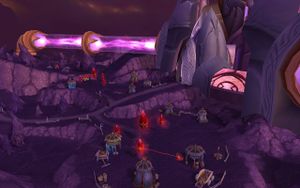 Blood elven camps near a manaforge.

Manaforges are arcane machines created by the Sunfury blood elves in order to harvest the chaotic magics of the Twisting Nether[1] from the Netherstorm. The manaforges were built from parts of the Tempest Keep designed to power the vessel during its travels by siphoning energy from the Twisting Nether. According to Exarch Orelis, manaforges are a form of energy recharger, which was never designed to be used so close to land. This use was ripping Netherstorm apart and accelerating its deterioration.[2]

The blood elves controlled four of the five manaforges as Ultris was taken over by voidwalkers along with the mine beneath it after it overloaded and exploded.[3]

After taking control of the Tempest Keep, Kael'thas Sunstrider and his blood elves harvested these parts and used them to construct the manaforges, despite concerns about the safety of using the technology on land. Those that were against it were immediately silenced.[4]

They fed energy through pipes into Tempest Keep. The magic was then channeled into the Mechanar where it was packaged into mana cells[5] both for Kael'thas' use and to be sent to feed Kael's people in Quel'Thalas. Kil'jaeden urged Kael'thas to continue his work and dispatch the mana cells as he secretly believed that the blood elf prince could later use the cells to help craft the Legion's portal in the Sunwell.[6]

After the manaforges were shutdown by the champions of Azeroth and their allies, and following Kael'thas' defeat at the Tempest Keep, Kael used ethereals to smuggle the remaining mana cells to the Isle of Quel'Danas.[7][8]