Mangletooth is a level 35 quilboar and the new leader of the Razormane tribe in the Southern Barrens. Before escaping Camp Taurajo, he was a quest giver tasking Horde adventurers with killing of the other quilboar.

Mangletooth was captured by the orcs and tauren and was awaiting his execution. At first, Mangletooth would try to convince players to attack the enemies of his tribe, the Bristlebacks, in hopes that this would convince his own tribesmen to save him. However, after he saw his clanmates — Nak, Kuz, and Lok Orcbane — for who they truly were, he started plotting his revenge. Prior to the Cataclysm, if a player brought him enough Blood Shards, he would cast the blessings of Agamaggan upon them.

During the attack on Camp Taurajo, Mangletooth was able to escape his prison and now leads the Razormane quilboar. Mankrik and Dorn Redearth both want him killed. 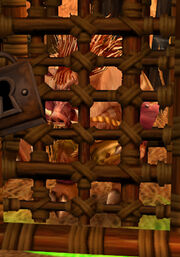 He is the objective of

He started and ended all the quests in the "Betrayal from Within" quest chain:

Initial gossip
You! <Race>! Come here. <snort>
Time is short, and my end <snort> is near. Mangletooth shall win; you will see. <snort>
My capture can still aid <snort> my people. The Razormane tribe is more powerful than the Bristlebacks!
The Horde looks to find out who leads the raids on their people. You <snort> shall aid Mangletooth in return for the information only I know. Mangletooth can help you! <snort> But you must help Mangletooth.

[21] Tribes at War
My hatred is strong <snort>, but the time is right to tell you a tale, <race>.
Long ago a battle took place between gods. Agamaggan, our great boar god, fell to the earth after being defeated in the War of the Ancients, his blood raining down and his bones torn asunder. <snort>
Great thorns reached up out of the earth where his blood touched the ground, and his skull adorns one of the caverns to the south.

[25] Betrayal from Within
You have <snort> aided Mangletooth more than I would have dreamed, <race>.
Thank you.
As long as I remain a captive here, you may bring me blood shards from the Bristleback quilboar and I will bless you with Agamaggan's power.