“I swore that nothing would stir me to take up this blade again.
I was a fool.”

Mankrik and his wife Olgra battled quilboars in a small tauren camp when they were separated by the overwhelming numbers. As he saw his wife being overwhelmed by newcomers, rage came over him as he turned to face his enemies, but they brought him down easily with their vast numbers. He later awoke to a tauren druid tending his wounds — the druid had come across him on the Gold Road as he fell.[1] Filled with uncertainty whether his wife was still alive or not, he stood at the Crossroads every day scouting the horizon for more quilboars to quench his bloodthirst.[2]

He later managed to retrieve the corpse of his wife and bury her, raising a humble monument in her honor. However his thirst for their blood had still not been quenched, killing every quilboar he'd seen since they murdered his wife and burned down his homestead.[3] Still not satisfied with the slaughter of the quilboar at Thorn Hill, he later traveled to the Southern Barrens, realizing that there will be no peace without his wife, wanting to see their very homes razed.[4] It's then hinted that Mahka helps him to settle with his troubles and may be romantically involved.[5]

Horde players fighting in the Molten Front may receive Mankrik as one of their random strike force partners in the daily quest,

[85 Daily] The Protectors of Hyjal. He will not join Alliance players. /waving at him counts toward the achievement,

He was present at Grol'dom Farm when the Burning Legion invaded Northern Barrens.[6] 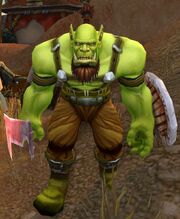 The subject of this section did not make it out of the beta stages of World of Warcraft: Battle for Azeroth.

I came to the Crossroads from the south seeking help, <class>, but I find only cowards who turn their backs on me -- even the mighty Thork insults me so. He is a good leader, but his dismissal of my plea causes me greater anger.

He claims my rage makes me hasty -- that it clouds my judgement -- but I will not rest until I have vengeance!

I thank you, <name>. Your dedication to my plea gives rest to my lost wife's spirit, and for that I could never repay you enough.

I cannot say that my hatred will ever cease for the quilboar, but it is satiated for now.

Now I must begin to rebuild my life.

I swore that nothing would stir me to take up this blade again.

Mankrik's hut in the Crossroads.

It is possible that Mankrik is a former member of the Burning Blade clan and a blademaster, as he shows signs of obsession (asking you to kill dozens of quilboar) and also displayed a Burning Blade banner outside his hut in the Crossroads. This seems to be confirmed with his new guise in Cataclysm. When he appears as a child in Warlords of Draenor he says "We're frostwolf. We don't lose, blood elf", implying that he is a member of the Frostwolf Orcs. However, since Kairoz claimed that the alternate Draenor is not a perfect copy, it is possible that Mankrik being a Frostwolf rather than a Burning Blade member is one of the differences between the alternate Draenor and the main timeline. Alternatively, he may have decided to leave the Frostwolves and be trained as a blademaster.