Mannoroth and Varo'then are the last bosses encountered in the Well of Eternity. 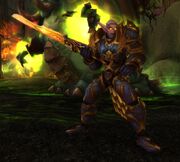 Varo'then, head of Queen Azshara's personal guard, and Mannoroth, the pit lord whose blood will corrupt the entire orc race, stand as the last line of defense against those hoping to bar Sargeras's entry into Azeroth. Though both Tyrande and Illidan have fought bravely thus far, the fate of Azeroth will be decided at the Well of Eternity's very brink.

Stage One: Dealing with the Rabble

Players must defeat Captain Varo'then while Illidan and Tyrande fight off Mannoroth and the demonic forces entering from the Well of Eternity.

After the players defeat Captain Varo'then, his enchanted Magistrike Blade lies on the ground. After a player throws and embeds the blade into Mannoroth, the demon begins to take massive damage from the stored magic within the blade.

Stage Three: Your World will be Unmade!

Utilizing the powers of nature bestowed upon him by the demigod Cenarius, Malfurion Stormrage focuses the will of the living creatures of Azeroth upon the demonic portal hovering over the Well of Eternity. When Mannoroth reaches 25% remaining health, Malfurion casts a spell to cause the portal to violently implode and pull the demonic legions out of Azeroth.

The players should engage Varo'then. The Magistrike appears as red chain lightning. The chain range appears to be quite large, so spreading out is futile. During Fel Firestorm the players can either run out of fire (like the Argaloth encounter in Baradin Hold) or group up near Illidan to take advantage of his Waters of Eternity aura.

The Doomguard Devastators are of no concern most of the time because Tyrande is 1-shotting them.

Once the party has defeated Varo'then his sword drops and becomes clickable. A party member should click it, which throws it at Mannoroth, embedding it in him, causing hits on him to sometimes inflict Magistrike.

Attack Mannoroth. As long as Tyrande is 1-shotting demons DPS don't need to care about them. If demons do start attacking the healer, bring them to the tank so she can AoE and aggro them.

Illidan casts Gift of Sargeras, buffing himself and the party, making it quicker to defeat Mannoroth. It is not yet clear if this is triggered by time or by boss health.

Intro
Mannoroth yells: Varo'then, see that I am not disrupted by this rabble.
Captain Varo'then yells: Highguard, to arms! For your Queen! For Azshara!

Aggro
Captain Varo'then says: For you, Azshara!
Mannoroth yells: Come, Stormrage, and I will show you what happens to those that betray the lord of the Legion!

Demons enter the fight
Tyrande Whisperwind says: I will handle the demons. Elune, guide my arrows!

Tyrande overwhelmed
Tyrande Whisperwind yells: Light of Elune, save me!
Tyrande is overwhelmed! Use the Blessing of Elune to drive the demons back!

Tyrande relieved
Tyrande can hold her own once again!
Tyrande Whisperwind yells: I will hold them back for now!

[That's Not Canon!]
Mannoroth yells: Your blood is MINE, elf!

Varo'then dies
Captain Varo'then says: Lights of lights! I have failed you. I am sorry, my Azshara...
Varo'then's magical sword falls to the ground!

Phase 2
Mannoroth yells: Lord Sargeras, I will not fail you! Sweep your molten fist through this world so that it may be reborn in flames and darkness!
A massive demonic portal opens nearby!
Illidan Stormrage yells: He is still connected to the well somehow! Focus your attacks on Mannoroth, we must disrupt his concentration!
Tyrande Whisperwind says: Illidan, I am out of arrows! Moon goddess, protect us from the darkness, that we may see your light again another night!
Tyrande is imbued with the shining light of the Moon Goddess!

Defeat
Tyrande Whisperwind says: Malfurion, he has done it! The portal is collapsing!
Mannoroth is slowly sucked towards the Well, and, in turn, towards a presumably angry Sargeras.
Mannoroth yells: No... no! This victory will not be ripped from my grasp! I will not return to him in failure! I will not be torn from this pitiful world! No... NOOOOOOOO!!