“We mantid are an elder race. The pandaren you associate with - they are but children. They have their role to play.
Each cycle, our young swarm their walls. The pandaren slay the weak. The strong return.
With each generation, we grow ever stronger.”

The Mantid Empire[2] is the mantid civilization ruled by Grand Empress Shek'zara. 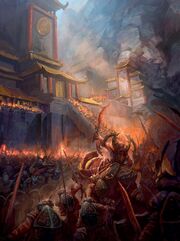 The mogu defending their land from the mantid.

In the ancient past, the mantid were a colony of aqir who shared the world with their sister kingdoms of Ahn'Qiraj and Azjol-Nerub during the war between aqir and trolls before the Great Sundering. Although the trolls thought the qiraji and nerubians were all that was left of the split empire, there was another colony that lived farther south. They worshiped an Old God with seven heads named Y'Shaarj, who was defeated by the titans upon their arrival, as their creator.[3] Indeed, the word "klaxxi" meant "priest" in the old tongue.[4] Y'Shaarj's shadows haunt Pandaria to this day, and the mantid swear that if it ever returns they will ally with its army instead of with the other mortal races of the world.[1]

The Dread Wastes are the mantid homeland. From here, Grand Empress Shek'zeer commanded a seemingly endless swarm of mantid. They hurl themselves against the Serpent's Spine wall, nearly overwhelming the Shado-Pan defenders. Historically, the mantid have swarmed in regular and predictable intervals. Mantid assaults on the Serpent's Spine are a terrible thing to experience, both as a defender, and as a mantid. Only the smartest, strongest, or most agile of the mantid survive this encounter, and pandaren defenders are slaughtered outright in terrible numbers. Mantid survivors make their way back to the great tress, often bearing trophies of their conquests. There, they are welcomed back into the mantid society, and take their place among their civilization according to the level of their deeds.[5] With each generation and each cycle, the mantid grow stronger.[1]


The recent swarm is about ten years too soon, and the pandaren are caught off-guard. It's not that the Empress is getting more strategic; in fact, her whole society is in the middle of an upheaval. Shek'zeer has been overwhelmed and possessed by the Sha of Fear, and she's running her empire into the ground. At her command, the mantid are embracing the sha, willfully corrupting themselves, their sacred trees, and the entire ecology of their land. Blind fear has driven the empress onto a warpath and it's tearing her civilization apart.

A council of mantid elders known as the Klaxxi are the stewards of mantid history and culture, and their goals are much more long-term than those of the empress. They recognize that the empress has lost her mind, and that swarming Pandaria will mean little if their entire civilization is given over to the sha in the process. The Klaxxi have now declared that their beloved empress must be put down. The Klaxxi do not have an army to fight back the swarm, but they do have access to the paragons, warriors of ancient mantid eras preserved in amber who are buried all over the Dread Wastes. These powerful champions, ingenious alchemists, and deadly assassins, preserved at the height of their abilities, must now be awoken if the corrupted empress is to be defeated.

After the rise of Grand Empress Shek'zara as the new Grand Empress, she mobilized most of her forces to search for Azerite.[6] When N'Zoth was freed from his prison Shek'zara allied the mantid with him, and they made regular raids with a new swarm into the Vale of Eternal Blossoms.

The Golden Lotus would learn that the new swarm developed a concentrated royal jelly that accelerates the growth of newly hatched mantid.[7]