Not to be confused with Monster Guide.

Manual of Monsters is a sourcebook for Warcraft The Roleplaying Game. It was published in 2003. It contains descriptions and game statistics for a large number of creatures that inhabit the Warcraft setting. As the book was published before the release of World of Warcraft, it only covers a few creatures that were introduced in the MMORPG and mostly covers material from the RTS series.

The book is out of print. However, it can still be obtained in a PDF format. A new creature source book for the World of Warcraft: The Roleplaying Game was released on February 7, 2007 called Monster Guide. It covers new creatures that appear in World of Warcraft and updates some of the creatures from Manual of Monsters with new game statistics and rules of the new Warcraft RPG game.

Chris Metzen was a co-author and a member of the "Design Assistance and Additional Material" staff for the book.

Chapter One: Creatures of Azeroth 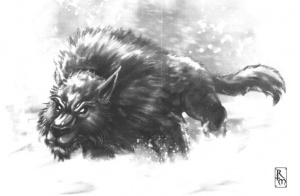 Appendix One: Animals and Vermin

In Appendix Two the book also contains descriptions and game statistics for the following major villains of the Warcraft universe:

Appendix Three: Other Monsters in Warcraft

For information about the monsters of this section, see Manual of Monsters/Appendix Three.

Finally, Appendix Three contains original lore for monsters and creatures adapted into the Warcraft setting from other d20 books (Monster Manual v3.5, Creature Collection Revised, Creature Collection II: Dark Menagerie, and Tome of Horrors). According to the book the updated lore takes precedence over descriptions found in the previous non-Warcraft books. The section also contains information on how to incorporate other monsters into a campaign for the Warcraft RPG. The background lore could be used by someone who wanted to include the monsters in their campaigns.[1]

Many of these creatures are unique, and have not appeared in previous Warcraft video games (although a few like the "floating eyes", "shadows", "bone golems" and others were incorporated later). A few entries (wyvern-wyvern, dryad-dryad, centaur-centaur) seem at first glance to contradict other known lore on the subject, however, the book explains that they are unique, or a rare variations of those creatures. And some of these rare variations appears to be in later sources (Centaur from the Eastern Kingdom, Dryad (tree spirit), and others).

Also, its notable that Appendix III expands upon creatures that were referenced in other chapters, appendixes, and sections of the book, for example mites, nymphs and shambling mounds. Some sections from the Appendix Three such as articles about giant eagles, sprites, nymphs, half-ogres, devourers, and a few others, have been referenced or expanded upon in later sources. The article about the elementals or Centaur from the Eastern Kingdom, were derived and expand upon ideas made in previous Warcraft games.

Appendix III is not the only Warcraft source to establish original Warcraft-related back stories to creatures from the D&D MM and other non-Warcraft sourcebooks. Some of the earlier chapters in Manual of Monsters incorporated a few creatures not included in Appendix III, including references to darkmantle and girallon.[2] Even more original creatures were established in other Warcraft sourcebooks including Lands of Conflict, Shadows & Light, Magic & Mayhem, World of Warcraft The Roleplaying Game, and Monster Guide Web Supplement, such as: dire lions, lizard familiars, or steam mephits, which are found in the story "Dark Iron Chains" that Brann Bronzebeard recounts in Lands of Conflict.

The Appendix Three was split into several sections which sometimes included a small background explanation on how the material related to biology or history of Azeroth. The following is a listing of some of these quotes;

The Kaldorei count many more allies than have been documented so far. Amongst these allies are several species from the Tome of Horrors by Necromancer Games. Some are ancient allies, others newly recruited (or reclaimed) allies, befriended by the night elves in the wake of their lost immortality.[3]
The minions of the Burning Legion are countless, yet below is a list of shock troops, animal cohorts, and generals alike.[4]
In addition to quilboar, tauren, elves, and orcs, other sapient species populate the world of Azeroth. Three of them are described in the Tome of Horrors.[5]
Orcs and goblins are not the only goblinoids on Azeroth. Some of the previously unknown species are crossbreeds, while others seem to be races unto themselves. Three of these species are discussed briefly below.[5]
The diversity of animal life on Azeroth is limitless. In addition to the creatures described elsewhere in this book, several species described in the Tome of Horrors can also be found on Kalimdor and throughout Azeroth.[5]
In addition to the diversity of life on the surface of Kalimdor, the seas of Azeroth are also teeming with life. Much of this life is mundane, if monstrously large, though the sea has her secrets — and threats. The following aquatic creatures listed in the Tome of Horrors can be found in the rivers, lakes and oceans in around Kalimdor.[5]

That MoM appendix was full of ideas about how you might incorporate monsters from other sources into the game, if you feel like it. Until I see mites running around in a Warcraft computer game, I wouldn't consider them canon.

However, the RPG staff involved have admitted that their opinion is their own and does not represent Blizzard Entertainment.[7]

This is a question many fans make themselves. Is each entry in the Warcraft RPG books to be considered canon to the Warcraft Lore?

Oh, there was a question. I don't think I have the power to make that declaration, since I'm not a Blizzard employee. What I can tell you is that Blizzard signs off (approves) every book before we publish it. So, they look it over, ask us to make any changes (i.e., "tauren don’t know about the Green Dream; can you remove this paragraph?"), then say, "Okay, publish this." I also think that these days we (and by "we" I mean "I") put more effort into making sure Metzen is cool with everything before the material makes it into the final manuscript. Also, sometimes when I ask Blizzard for reference material (i.e., "What can you tell me about Sandfury trolls?"), they quote my own books back at me.

From a marketing perspective, Appendix III could help attract customers of D&D and other d20-type games to the Warcraft franchise if creatures familiar to them were included or available for use during RPG gameplay. Alternatively, Warcraft gamers could become more interested in the D&D franchise.

Since Wowpedia strives to have a neutral point of view on official lore (both canon & non-canon) it is included on Manual of Monsters/Appendix Three and a link in the relevant articles.

The final section is a table showing a variety of monsters how much of a challenge they are and what classes they tend to be. 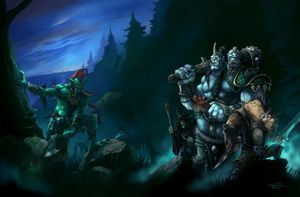