The Maraudine clan (or simply the Maraudines)[1] of centaur were founded by Maraudos. One of the five main clans of centaur, they occupy and maintain the temple of Maraudon, a shrine to their ancient Khan and the procreators of the centaur in Desolace.

Some time after the Cataclysm, the Maraudine and other clans of centaur joined under the new High Khan. 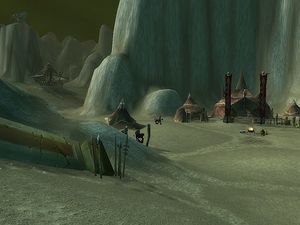 Maraudine centaur in the Valley of Spears.