March of the Scourge (WC3 Human)

It involves the player defending their base from a large undead assault. There is also a side quest in which the player is given the option to go out and destroy a caravan of plagued grain before it infects all the outer villages.

Early the next morning, Arthas and Jaina approach the village of Hearthglen. 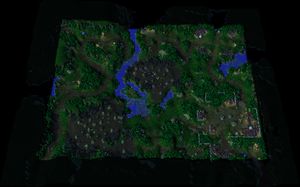 An Undead army has arisen overnight and marched against Hearthglen. You must defend the town until Jaina returns with Lord Uther and his reinforcements.

The Undead have constructed a caravan to distribute plagued grain to the neighboring villages. If the caravan reaches them, it will transform them into Undead outposts. Intercept and destroy the caravan before your forces are hopelessly outnumbered.

Jaina and Arthas arrive to Hearthglen, where a number of Riflemen and Footmen are busy training.

Jaina Proudmoore: Hearthglen, finally! I could use some rest!

Footman: Prince Arthas! During the night, a vast army of undead warriors emerged and began attacking villages at random!

Footman: Now, it's heading this way!

Arthas: Damn it. Jaina, I'll stay here to protect the village. Go as quickly as you can and tell Lord Uther what's happened.

Arthas: Go, Jaina! Every second counts!
Jaina goes to a corner of a house and teleports away. Arthas looks over at some opened crates...

Arthas: Wait--what did those crates contain?

Footman: Just a grain shipment from Andorhal. There's no need to worry, milord. It's already been distributed amongst the villagers.

Arthas: Oh no.
Some of the nearby townsfolk fall asleep and begin to transform into Zombies.

Arthas: The plague was never meant to simply kill my people. It was meant to turn them... into the undead! Defend yourselves!

Arthas: Hold your ground! We are the Chosen of the Light. We shall not fall!

Villager: We'll fight for Lordaeron. Get your swords!

Mark: Thank you for helping me.

Footman: Ogres have moved down from the hills. It appears they're looking for a fight.

Arthas: This is impossible! Their number seem limitless.

Arthas: That caravan must be stopped before it reaches the outer villages!

Footman: Prince Arthas, the caravan has infected the second village.

Footman: Milord, the third village has been infected!

Footman: Prince Arthas, we've failed to stop the caravan! It's reached the final town and turned it into an undead bastion!

Arthas: This is a nightmare!

Acolyte: Faster, my brethren! If we lose the shipment, the master will have our hides!

Arthas: I just pray that the grain hasn't reached any more villages.

Hordes of undead flood into Hearthglen and begin to overwhelm Arthas' forces.

Arthas: Light, give me strength!
Suddenly, a contingent of knights arrive and begin fighting off the Scourge.

Uther the Lightbringer: For Lordaeron! For the king!

Arthas: Uther, your timing couldn't have been better.

Uther the Lightbringer: Don't celebrate yet, son. This battle's far from over!
Later, after the town has been secured...

Uther the Lightbringer: I'm surprised that you kept things together as long as you did, lad. If I hadn't arrived just then--

Arthas: Look, I did the best I could, Uther! If I'd had a legion of knights riding at my back, I would've--

Uther the Lightbringer: Now is not the time to be choking on pride! What we faced here was only the beginning. The undead ranks are bolstered every time one of our warriors falls in battle.

Arthas: Then we should strike at their leader! I'll go to Stratholme and kill Mal'Ganis myself if I have to!

Uther the Lightbringer: Easy, lad. Brave as you are, you can't hope to defeat a man who commands the dead all by yourself.

Arthas: Then feel free to tag along, Uther. I'm going. With or without you.
Arthas departs.

Arthas Menethil and Jaina Proudmoore arrive at the village of Hearthglen where they discover the inhabitants are preparing for battle. The commander of the town guard tells Arthas that an undead army is coming to attack the village. Arthas tells Jaina to go and find Uther while he stays and defends the town. Jaina reluctantly obeys and teleports away.

Arthas then notices some suspicious-looking crates nearby. He asks what was in those crates. The commander replies that it was just a shipment of grain from Andorhal and that the grain has already been distributed amongst the villagers. Suddenly, several of the villagers fall into a strange sleep and are transformed into zombies. Arthas realizes that the Scourge plague not only kills people, it brings them back as the undead.

Arthas and his troops swiftly dispatch the zombies. Soon afterwards the Scourge army arrives and begins its assault on Hearthglen. Arthas rallies his men and they fight off wave after wave of undead.

In the middle of the battle, Arthas learns that a caravan of plagued grain is passing through the area infecting other villages. Arthas and a small group of men track down the caravan and ambush it. They slay the undead escorts and destroy the Meat Wagons carrying the plagued grain. Arthas and his troops then hurry back to the village.

As the siege of Hearthglen continues the undead grow stronger and stronger with every attack. The defenders are slowly being whittled down. Finally, the undead launch a massive assault against the town. This attack is led by a pair of Liches who use their destructive powers to breach the defenses. Countless undead pour into the town and start overwhelming Arthas' forces. Arthas is on the verge of defeat when suddenly Uther and Jaina arrive with an army of Silver Hand knights. With the undead now caught between Uther's forces and the remaining town defenders, the tide swiftly turns in favor of the humans.

After the last of the undead are defeated, Uther and Jaina meet with Arthas to discuss the situation. Despite having won the battle, Arthas is humiliated that he almost lost. Uther sternly tells him that they can't afford to let pride distract them. What happened here was only the beginning. Arthas argues that the best way to defeat the Scourge is to kill their (supposed) leader Mal'Ganis who resides in the city of Stratholme. Uther warns Arthas that he can't do this on his own. Arthas retorts that he is going after Mal'Ganis with or without Uther's help.

At the start of the mission (after fending off the initial attack), backtrack along the path Arthas took to get to Hearthglen and stop by the farmhouse there to pick up 3 additional Footmen. You can also destroy the Hearthglen Building to access a crate that spawns a sheep. Killing the sheep grants Potion of Restoration.

It is recommended that you complete the side quest as to prevent the Scourge from attacking you on all 3 fronts. In order to do this, you will need to split up your forces, with a sizable group plus Arthas taking the long way around the map to intercept the caravan (be sure to free up inventory spaces first as there will be item rewards along the way), while a smaller group remains behind in your base with the support of defensive towers. The smaller group can built up or have casualties replaced over time, but sending reinforcements to Arthas across the map is difficult to manage.

On Normal Mode the Scourge will largely ignore the opening on the eastern side of the base.

Rescuing Mark will grant the player Boots of Speed.