From Wowpedia
(Redirected from Marcus Jonathan)
Jump to: navigation, search

Marcus Jonathan was the general of Stormwind City and high commander of Stormwind Defense. He was a level 87 elite quest giver located in the Valley of Heroes in the human capital city of Stormwind City. Hammond Clay succeeded him after he was killed in action at the Battle of Theramore. 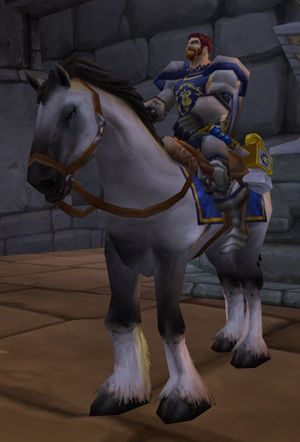 Marcus visited Dalaran at least once while still a private, as evidenced by

[Private Marcus Jonathan's Copper Coin] from the Dalaran fountain. He seemed to have more than gotten his wish "to grow a glorious, bushy mustache someday."

He and Reginald Windsor served together under Turalyon[1] during the Second War.

Marching through the gates of Stormwind, Lo'Gosh and his friends were halted by General Marcus Jonathan under the direct jurisdiction of Katrana Prestor, who ordered their immediate arrest and execution as traitors. Windsor succeeded in convincing Marcus of his loyalty to Stormwind as they had previously served together.[1]

When the Emerald Nightmare invaded the Valley of Heroes, he sent Major Mattingly for reinforcements to King Wrynn. Moments later the mists seized the valley.[2]

When raging elements invaded the city, Marcus remained at his position warning adventurers of approaching danger. He was also protecting Worried Citizens.

When an adventurer defeated Hogger at Hogger Hill in Elwynn Forest, Marcus arrived and arrested Hogger.

Blood of Our Fathers

When Varian Wrynn went missing when he was supposed to give his Remembrance Day speech, Marcus Jonathan ordered Field Marshal Afrasiabi to stall the crowds while he organized a search for the king. He and Jaina Proudmoore found the king dying from wounds suffered while saving Anduin Wrynn from Twilight's Hammer assassins, and witnessed the prince heal his father with the Light.[3]

When Jaina Proudmoore called for help defending Theramore Isle against the Horde, Marcus Jonathan was the first to be asked by King Wrynn to lend his support, and was the first to accept. He was the main organizer of the defense of Theramore. He was killed when Garrosh Hellscream detonated a mana bomb, which destroyed the city.[4]

The knight is tall, with wide shoulders and a sweeping mustache, proudly wearing a suit of heavy plate mail. The Stormwind insignia is emblazoned across both the breastplate of his armor and the crest of his helm, and a series of smaller engravings indicates that he is a high-ranking officer in the human army. His stance is that of a battle-hardened veteran, wary but still at ease, as if he is absolutely confident in his ability to deal with any danger that comes his way. General Marcus Jonathan is absolutely fearless in battle, completely willing to lay down his life in the defense of his country. He always strides boldly into combat, attempting to identify and then work his way toward the leader of the enemy forces. He prefers to move steadily into the middle of the enemy force, surrounding himself with enemies in order to maximize the benefit of his cleaving attack and to gain a moderate amount of cover from enemy archers.[5]