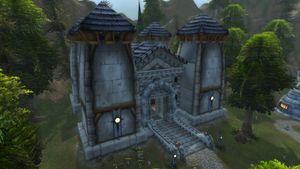 Mardenholde Keep in World of Warcraft.

Mardenholde Keep is the fortress keep of the town of Hearthglen in the Western Plaguelands, currently held by the Argent Crusade.

The paladin Tirion Fordring had ruled Hearthglen from Mardenholde for several years, until he was charged with treason for aiding the orc Eitrigg and removed. His deputy, Barthilas, became the next leader of Hearthglen before moving on to Stratholme. Following Lordaeron's destruction in the Third War and the rise of the Scarlet Crusade, Mardenholde became the center of the Scarlet operations in the region, and was ruled by Highlord Taelan Fordring, Tirion's son. Hearthglen later sent troops to the Scarlet Enclave east of Tyr's Hand, along with crusaders from Tirisfal Glades; the combined Scarlet armies were destroyed by the Scourge shortly thereafter, after they were led into a trap by the Lich King and the death knights of Acherus.

Following his victory in the war against the Lich King and the great Cataclysm that reshaped the world, Tirion Fordring - now Highlord of the Argent Crusade - retook Hearthglen and set up the base of operation for his soldiers.