Mardigan is a worgen warrior and the son of Karlain, a mage. He is young, ill-tempered, and lacks discipline, and has on at least one occasion gotten into a bar fight. Mardigan has been accused of murder and after fleeing from Goldshire, Mardigan sought out the Wolf Cult to prove his innocence but was abducted and forced to become a worgen.[1]

Mardigan went to acquire a rage inducing potion for his father from their local alchemist in the Lion's Pride Inn when he exchanged heated words with a human stranger that led to brawl. Fortunately, Marshal Dughan broke up the fight before weapons were involved and escorted him home. Having been briefed about the fight from Marshal Dughan, his father, Karlain, scolded him for his hooliganism and ordered him to make amends by acquiring a replacement potion for the one he didn't come back with and apologizing to the stranger he fought with.

After accomplishing his errand, Mardigan returned home at night to find his home desecrated, his dog murdered, and a message in blood taunting him with the phrase “See you next time”. Mardigan went back to the Lion's Pride Inn to accuse the stranger he fought of his hound’s murder only to find him bleeding to death. The stranger, in his dying words, told Mardigan that he was a member of the Wolf Cult from Duskwood and on the run after witnessing something heinous. The Wolf Cult found him and he dies from his wounds. The innkeeper finds Mardigan and the dead stranger and accused him of murder.

Mardigan traveled to Darkshire to investigate the Wolf Cult. He later infiltrated the Wolf Cult and impressed its leader Gervase, who considered him a fine candidate for their ranks. Yet he refused to fulfill the final trial. He was transported to Roland's Doom where he was subdued and underwent a worgen ritual. The worgen marked him with the Scythe of Elune and then was bitten by the worgen pack's leader. After he was bitten, his father Karlain accompanied by Revil Kost and Ambrose rushed in to defeat the worgen. In the midst of the fight, Mardigan ran towards the woods. Fully transformed, he attacked Karlain and Revil as they were burying their companion. He was subdued and Karlain used a rage suppressing potion on him allowing him to recognize his father. Though their relationship was still rocky, Karlain assured his son he would do everything in his power to cure him. Mardigan still held a deep resentment for his father which exacerbated the worgen's innate rage. Thus he told his father to keep his distance.

Later on they drifted off to sleep but they were awoken by Revil Kost. Revil Kost was taking them to someone who knew of a worgen cure but in reality he was using them as bait for the Dark Riders. His ploy worked as the Dark Riders attacked them. Fortunately, Revil had prepared an ambush for them and had the Night Watch Militia and Brink, the rogue gnome, bolster their party. When the battle turned unfavorable for the Dark Riders, one of the Dark Riders teleported the whole party to Karazhan. Revil Kost wondered off and Karlain was attacked by more Dark Riders. Mardigan savagely defended his father and Karlain did the same for his son but the floor gave in and they both fell to another floor of the tower. In this floor, Mardigan was shown a false vision of his father murdering his mother in a jealous rage. This vision enraged him to the point where he lost himself to his beastial fury and he turned to attack his father but was subdued by his magic. Revil who had rejoined them, used his Cloak of Purity to ward off the fel magic of the tower and Mardigan was able to see the true vision: Karlain defending his wife from a rapist but accidentally killing her in the process. Having seen his father’s regret and sorrow for his actions, Mardigan was able to calm himself and forgive his father. With the danger passed and their family bond restored, Karlain teleported the party out of the tower. Karlain stated his intention to search for a cure for his son which will require more investigation on the Wolf Cult. Seeing as Revil looked like a man in need of a purpose, the family invites him to journey with them on their quest. 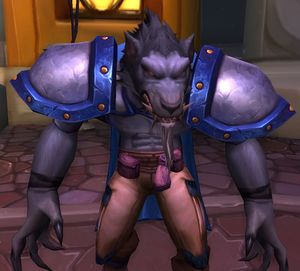 Mardigan can be found in the Purple Parlor in Dalaran, speaking to Alfred Copperworth. Revil is nearby.